The Monkey Sancutary of Ghana

Monkey Sanctuary
With the sunrise of the morning, we stepped on the road to the monkey sanctuary.It was a long trip that we headed north part of Ghana for almost 4 hours. When the driver drove our van on the main street, I found that the deforest rate is significantly high that a lot of grasses or forest were burned, mainly due to people who are for fertile soils to plant or for building their houses. Through deeply analyzing what I saw in the past few days, I realize that both local civilians and government have ignored such a critical environmental issue and have not considered about what they should leave for their offsprings. The best solution I think should be that local government needs to provide enough resources for local people to build their home. Around half hour later, we stopped by one restaurant. However the food would be available for almost one hour, mainly because of no advanced equipments. Upon knowing how long they normally cooked, I thought that not only should we support clean water to people who are from third world countries, but also we need to provide some advanced skills or equipments on cook.

Around 1pm, we arrived at the monkey sanctuary. However, the first thing I saw was not money, but the kid carrying peanuts. He wears one raggedy cloth which has a lot of holes . When I would like to donate twenty dollars to him, Dr. Seth told me that if I gave him cash, he would not go to the school again. This is my first time to realize that helping one person is not just giving their money, but is giving their motivation to accept education and study hard. Soon, we entered into the monkey sanctuary. Upon stepping on the ground of it, I found that several black monkeys who stayed upon the trees flung their arms to us, it seemed that they were welcome to us. The tour guide told us that black monkeys usually did not eat bananas or peanuts. In fact, this was brand new for me because monkeys I usually saw in China or America were just typical brown-furred monkeys that usually eat bananas. Keeping going the tour, we saw a lot of white monkeys, who beg to us for bananas we had. This was my first time to play with monkeys in such short distance. They are so cute and smart that they are able to peel banana through their hands. Also, I found that there was a mother monkey who took care of her children. This is really an amazing scene that let me remind of Darwin’s theory, which stated that human beings would be evolved from monkeys. Then, we took a lot of pictures about how mother monkeys cared their children. Around 20 minutes later, we saw the monkey cemetery under the lead of our tour guide. Upon seeing the cemetery of monkeys, I gradually began to realize that the people who live in this village do not only respect the monkeys, but respect the natural way they live and ecosystem itself. On the way we were back, we saw one interesting tree, which grower on the trees having already died. The guide tour told us that everyone could climb it because of its flexible characteristic. I tried to climb the tree and felt so fantastic that I would never forget. After the tour to monkey sanctuary, the reason for why the indigenous people admire monkeys is clear. Not only does they merely admire the monkeys itself, but admire the spirit of the nature they live. In fact, they believe nature, which is like religion for them.

On the way we were back to hotel, we visited the home of the father of Dr. Seth’s wife, who is a kindly old man. And we briefly introduced ourselves. When we left his home, there were several kids, who were playing with each other and they were friendly welcome us to visit their village. Upon seeing these kids, I felt that people should not hate each other in the world. The children could understand each other and treat everyone friendly, why did people hate other people who came from another countries? The answer maybe complicated to answer, but I believe the day people never hate each other will come. 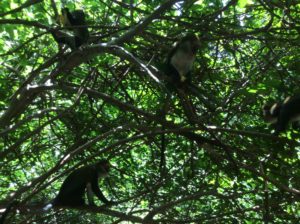