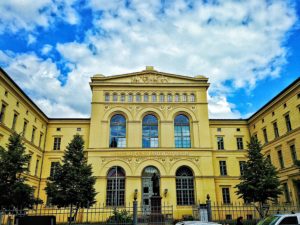 Today was my first full day in Berlin. I was supposed to arrive early Saturday morning, but due to delayed flights I arrived Sunday evening. Directly after my arrival, along with two friends, our group of University of Alabama students went to a restaurant just down the street from Humboldt Universität, our host university for the summer. While we were there, we were able to view the Germany vs. Slovakia soccer game with many very enthusiastic German fans. After a victory from the soccer match, a couple of friends and I wandered around the city. We walked over Museum Island, to Alexanderplatz, and viewed the Fernsehturm from just beneath it. Having only been in Berlin one full day, I still feel like I have been here for weeks, if not months. Berlin feels like home to me.

This morning, I was fortunate enough to meet several people that will also be participating in the Humboldt program. These people have come from across the world (Australia, Russia, India, China, Japan, Sweden, America) to take the courses I will be taking this summer. After a placement test this morning, some of our professors gave us a tour of the campus, and directly after took us to a picnic in the park. A long bus ride around the city today allowed for me an a few friends to see some of the sights, such as the Brandenburg Gate and the Reichstag Building, in Berlin without spending too much time or money. My roommate and I have already begun to improve our German. We lasted nearly the entire day without using English. One of the most satisfying things about learning a foreign language is being able to carry on a conversation with a native speaker without hesitation on either side of the discussion. It has also been rewarding to be able to translate for English speakers who do not speak German or German speakers who can not speak English. I have a lot to look forward to over the next five weeks, but I am already beginning to fall in love with Berlin.