I have been at UC Dublin in Ireland for a week and have already learned many lessons and experienced many new things. After spending time preparing for my trip I was excited and nervous to see what a new country had in store. I had done all the research I could and planned all that I needed to get there. I had never been to Europe so I was eager to see what experiences await. After spending the day settling in on Monday, I spent Tuesday exploring the campus and the city with several other study abroad students. At this point I was still nervous and wondering what else this semester would have in store even though I was enjoying everything that the city had to offer. The first week here included many orientation events that really helped me to get settled in and over my nerves. I have made friends and hung out with people from all over the United States and all over the world. Not only has this study abroad allowed me to learn about the culture of Ireland, but I have learned more about countries such as Germany, Austria, and Australia through the people I have met. It has been an incredible experience to meet all of these people and learn so much all before my classes even start. 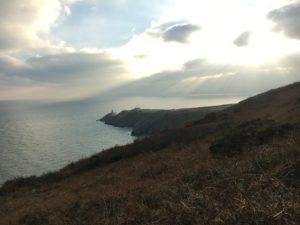 My first weekend here a group of us took a trip to Howth, a village just north of Dublin. The town itself was phenomenal and seeing how exquisite the country is has excited me to see what else I can find. Above is a picture I took while doing a cliff walk in this beautiful town. After a short train ride from where I stay I was able to see a landscape that I could see in very few places.  After only a week, and while coming in never having been in Europe, I have seen some beautiful things, met some incredible people, and overcome my nerves for being in a foreign country. I am excited to see what else this country and continent have in store for me during my months of studying abroad!