Lemonade is actually sprite. Thongs are flip flops.  Toasties are sandwiches.  And everyone screams “Yeeew!” when they’re excited.  Tim Tams are delicious and Aussie guys will make any girl swoon!

This first week in Australia was nothing less than awesome! I landed in Brisbane to begin our orientation with ISA – the program that is hosting my study abroad program.  Our group travelled to Byron Bay where we immediately began soaking in the ‘Stralian culture.  We started off by hearing from an Aboriginal couple and learned about the history of their tribe and what they believe to be important concerning the environment and their family and ancestors, along with some music from the didgeridoo.  We soaked in the hot, hot sun (maybe too much) when we attempted to learn how to surf . . . let’s just say it’s easier than it looks.  We finished the day by looking over the beaches of the Pacific Ocean at the Byron Bay Lighthouse, followed by cool showers and lots of aloe.

Next we ventured to an organic farm to learn more of the environmental aspects of the land down under. Following the tour, we headed to Brunswick Heads for a short kayaking trip to some tucked away beaches, some of the locals’ favorites.

The next day, we packed up our bags and said goodbye to the beautiful town of Byron Bay and hopped on the bus to the airport. On the way, we stopped at the Currumbin Wildlife Sanctuary and got to play with baby kangaroos, as well as seeing other animals like koalas that are native to Australia.

We arrived in Sydney that evening and were blown away as we departed and drove to ICMS (the International College of Management Sydney) in Manly. The sun was setting over the ocean and we got a glimpse of the opera house! We then drove up to ICMS, a beautiful castle and our school and home for the next 4 months (I GET TO LIVE IN A CASTLE!) 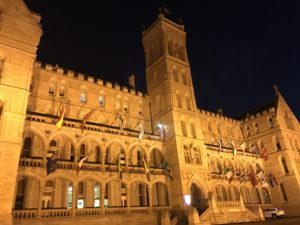 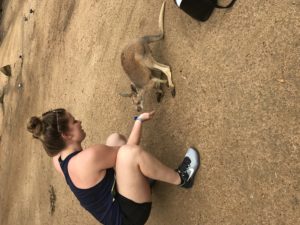 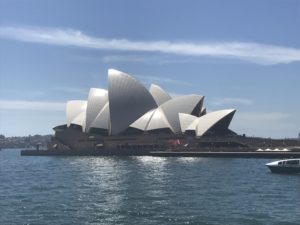