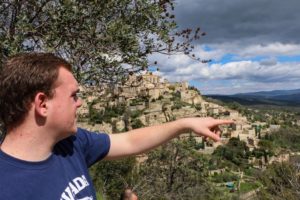 These past few weeks have provided me with the opportunity to travel to a couple other large metropolitan areas of Europe, specifically Munich and Barcelona. Despite being in the same time zone and just a few hours from each other by plane or train, each feels vastly different in size and sense of tourism.
Before beginning, I feel it is important to mention that the weather most likely had a very large impact on the number of tourists and the general feel of each city, as I experienced mostly cold, cloudy days in Munich, compared to flawless clear skies and sunshine in Barcelona.
As would be expected based on this difference in weather, the number of tourists was dramatically different between the two cities. Everywhere I went in Barcelona on the subway (which was actually quite large) and when walking in the streets, I was met with groups of American, British, Spanish, and French tourists. This differs drastically from what I experienced in Munich or even in Paris, as one often feels immersed in the city and its people when on the subway or walking about, even in the more famous areas of either city. This difference could be attributed to the greater size of Paris and the bad weather in Munich, but it was quite a difference all the same.
The size of each city, and whether one actually feels it, was very different in comparison as well. Paris is a large city, and even though it has a wonderful subway system, it still feels very large. Thankfully, the subway system covers nearly all areas of Paris, and one would most likely find at least one metro station by walking at most 500 meters in any given direction. Barcelona is still quite a large city, but since most of the main tourist attractions are within the same general area of the city, it does not seem that far, and walking is feasible. Munich, feels even smaller, with all of the main tourist attractions within a 15- to 20-minute walk from the main square in front of city hall, but a subway system that can seem at times to be quite slow and spread out compared to Paris or Barcelona. As a result, my journey to these three cities, each one vastly different from the next, really brought to my attention the effect a large subway system and the location of tourist attractions can have on the overall feel of a city, ultimately leaving cities like Paris to seem quite daunting at first due to the size, and cities like Barcelona to feel overcrowded with tourists due to the close proximity of all the tourist attractions.