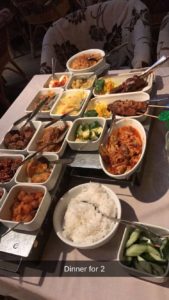 Here in London I have made friends from all over the world, my closest friends are from Germany, Italy and Mexico. All three of these cultures are very different but also have some similarities, one being the love for good food. Many days after we have class we will all go out to dinner to try the different foods around the city. I had never had authentic Indian food until one of my friends one night suggested we go out to a Indian restaurant in Mayfair. The food was extremely different but good at the same time. Since being here I have learned that I  love falafel, a traditional middle eastern food made of fried chickpeas and salad.It is something many people eat for lunch and is commonly found at food markets, every place you go it is made a little different but still extremely good.  I have also had the opportunity to try pho, traditional Vietnamese soup. It is made with rice noodles in a house made broth usually served with meat and vegetables in it. Once you are served it you then add your own spices to make it as flavorful as you want. I have loved living in London and being able to go all around to different areas of the city and try the different food. Then when traveling we get to try the local food of the area. The most interesting meal I have had was in Amsterdam when me and my friend tried authentic Indonesian food. Amsterdam is one of the few places in the world that has authentic Indonesian food due to their culture and Indonesian people not traveling as much as other cultures. Me and my friend tried a full rice table, which was pretty much made up of samples of everything on the menu, and I honestly think it was one of the best meals I have ever had. I have attached a picture so you can see the mass amount of food that was served to us for only two people.