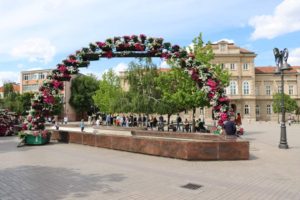 Along the Danube in Smederevo 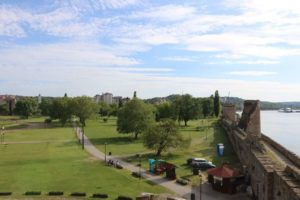 From on top of Smederevo’s fortress

Today marks Day 4 of the Serbia Fellowship Experience. Early this morning, after breakfast and coffee, we prepared to head to the nearby city of Smederevo for the day. I imagined it as a small, historic town outside of Belgrade, but Smederevo is actually a quite vibrant, mid-sized city along the Danube River. The banks are open to many paths, some shops, and passing trains. Close to the city’s center, bright cobblestones reflect the open space. I really enjoyed the warmth of the city. We arrived and went to the local gymnasium (a grammar and science high school) to meet with students. It was pretty interesting and engaging from the second we walked in the door. A group of 16 American college students is probably not very inconspicuous, so we had a lot of fun/interesting initial reactions. Our facilitator, Angela, was a senior student there and such a gracious guide. We spoke to students in a ninth grade class first, asking them about the things that interested them and answering their questions, as well.

We talked about everything from school to pop culture, government to weekend plans, Netflix to YouTube. This was actually our first, in-depth interaction with Serbian youth, and it was quite an immersive and enjoyable experience for the most part. A few of us went on to speak with an upper-level physics class, and then later we all mingled with a group of seniors. This group was especially lively, and we heard first-hand how some Serbian youth envision their lives beyond high school: some speak of college, others of going to Belgrade, many would like to go abroad, and some others shrug ambiguously at the economic and political challenges. We spent a great deal of the remaining afternoon around Smederevo’s center and strolled through the beautiful fortress grounds and around the Church of St. George. I left with the impression that Smederevo was very much a community first and more lively because of it. It’s the kind of place that is nice to call home, even if children move off and seek opportunity elsewhere. It was definitely a pleasure to be able to meet and learn from some of its people for a day.

Until next time, Smederevo,

New Serbian word of the day: Imam (I have)