This is my last week in Spain. I am starting to miss the US a little bit, but I am not 100% ready to come home. I have had a great time in Spain. Last weekend, we went to Barcelona. We went to Park Guell, the Sagrada Familia, the Olympic Park, and the art museum. I had a great time, and we have visited other cities in Spain as well. As a part of our program, we have visited Bilbao, San Sebastian, and Roncevalles. I actually went to San Sebastian twice. Once as a part of our program, and the other time as a part of a group of students who went over one weekend. I have enjoyed the trips around Spain because it gives me chance to see other parts of the country that I likely wouldn’t have been able to see. This has allowed me to see many aspects of the country. I have seen the Catalan region of Spain, the Basque country, and Madrid as well. All of this traveling around has also helped me with my Spanish, which is one of the major reasons I chose to study abroad. When I first came to Spain, I didn’t have much trouble reading written Spanish, but could not hardly hold a conversation. Now, I have found that I am a lot more comfortable with listening to people speaking Spanish and talking with them. This study abroad trip has been a lot of fun for me, and I would recommend that everyone who gets the opportunity to study abroad to do it. 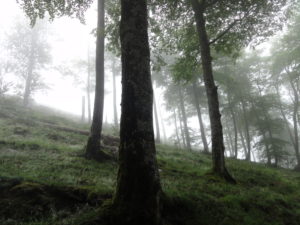