Before I dive in I think I should explain the game plan- because it is a complicated one. I decided to use my study abroad opportunity in Spain as an excuse to tag on a bit of additional backpacking and sightseeing. My official program will take place in a town outside of Madrid during the last bit of May and most of June. Beforehand, I will be backpacking with my roommate starting in Paris and moving around Spain until we reach Madrid!

I’ve always known that I wanted to study abroad while in college. Not only does a study abroad program help to knock out some credits but it also allows you to fully soak in a foreign culture in a way that is not just “vacationing” with all the “touristy stuff”. As an Engineering major and a Spanish minor, it can be hard to fit in all the classes needed during the school year. This program will allow me to take two spanish classes during the summer so that I can focus on my engineering classes during the school year! I am so excited for the opportunity to improve my fluency as well as get a wide taste for the culture and people of Spain.

Preparing for this trip was tricky to say the least. I had to pack for a whole slew of climates over seven weeks, try to be somewhere within the realm of European fashion standards, AND fit it all in a 70 liter backpack. This required me to not only pack lightly, but also pack things that could be worn in almost any combination (hello neutrals!) I ended up packing four short sleeves, two long sleeves, a pair of workout shorts/ jean shorts, jean skirt, jeans, three dresses, a light jacket and a windbreaker. As a chronic overpacker this really scared me. “What if I’ll need ___? Or ___?” You won’t. And if you do end up needing something you forgot, you can buy it where you are! *this might not be true for some parts of the world but it definitely is in Europe!.

Some parts of my preparation weren’t physical but rather emotional and mental. Three days before my departure I found out my grandfather was very ill. It hurt knowing that the three months of the year that I could potentially spend at home to be with him- I would be on another continent. In order to help me feel more connected to him and to brighten his days, I decided to make a “Flat Pappy” (remember the Flat Stanley book from elementary school?!). It’s essentially a cut out of my grandpa that I plan to bring with me on my adventures and take pictures with to cheer him up. Everyone that goes abroad for any amount of time will most likely be leaving something or someone behind that they’ll miss, and I’m not going to lie- it’s really hard! Maybe consider buying postcards to send back throughout your trip or making a “flat” version of the people you’ll miss too.

I was initially very nervous about this trip. I’m an overthinker and an over-preparer at its finest. Having never traveled abroad before,  I know that I can’t even fathom some of the situations I will find myself in and I can’t fathom the scope of change that is about to happen. I’m trying to remind myself that no matter what happens (good or bad!) it will be a learning experience and at the end of the day, that’s really what I’m going for. I’m trying to not let myself think of the destination too much or let myself “look forward” to anything because then I’ll end up not living in the moment. I wrote myself a little “pep talk” to read in case I ever get overwhelmed or homesick while abroad. Hopefully I won’t need it but if I do, I think I’ll really appreciate it.

Overall, my goal while studying abroad is to learn more about Spain and spanish culture while simultaneously learning more about myself. Maybe I’ll really hate paella, who knows? I certainly won’t know until I try it. I’m so excited for new experiences.

Below is a picture of my backpack- aka my entire life for the next few weeks- and my “Flat Pappy”! We’re off 🙂 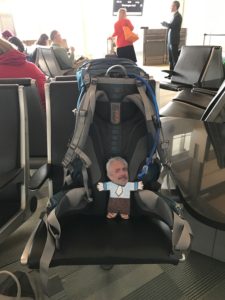