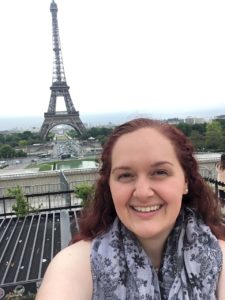 Since I was a little girl, sitting up at night reading Madeline in bed, I have dreamed of visiting Paris! I began studying French when I was nine years old and immediately fell in love with the language. So, when I decided to study abroad with the UA in France program this summer, I was over-the-moon excited to finally get to visit the place that I had longed to see my entire life!

When I arrived in Paris, it met all of my expectations! It was breathtakingly beautiful. All the streets were lined with cute little shops, boulangeries, and crêperies. Famous monuments, churches, and other historic buildings were just around every corner! There were magnificent gardens and sophisticated Parisians who people-watched as they sipped their apéritifs in little outdoor cafés. And you could see the Eiffel Tower from literally anywhere in the city. Most importantly, I was finally getting an opportunity to use the language I’ve spent so many years studying, and that was the greatest thrill of all! After just a couple of days, I had fallen head-over-heels in love with Paris!

Me and La Tour EiffelAs we continued our visit, however, I found myself growing less and less patient. I was frustrated with how many tourists there were and thus how much English I was hearing, since after all, I came to practice my French. I was ready to give up on navigating public transit. All I wanted was a quick dinner that didn’t last upward of 2 hours. I was becoming more and more desperate for just a tiny bit of air conditioning…plus the restrooms were weird, the menus were unclear, and I was tired of being surrounded by so many people all the time.

I had been warned before leaving the United States about the stages of cultural adjustment. Like any new relationship, the relationship with a new city often begins with a romanticized “honeymoon” phase, and then proceeds into stages of hostility and humor until at last, if you stay for long enough, the place finally begins to feel like home. When I was told this, I immediately disregarded it, thinking to myself, no…there’s no way I could ever feel anything less than perfectly, blissfully happy when I am in France. I never believed it could happen to me!

One night, however, while I was with some friends, I started listing and numbering my frustrations, and by the time I was finished, I had over 40 distinct complaints. Oddly enough, after acknowledging my frustrations outright, their power over me seemed to dissipate. Of course public restrooms were still difficult to find (and cost money), and public transit was still intolerably hot, but I had begun little by little to accept these things as a part of life and to notice more of the positive things! For example, I discovered my new favorite lemonade (Pulco Citronnade), and the magnificence that is raspberry juice! (Hey, the French have more to drink than just wine!)

This morning, as I walked around the Quartier Latin for the last time before our group departed for Tours (the next stop on our Study Abroad journey), I was filled with such a nostalgia and love for the simple things I had grown to appreciate about the city. The feel of the cobblestone roads beneath my feet, the satisfaction of ordering a pain au chocolat at a pâtisserie…

I enjoyed the tranquil atmosphere of a Sunday morning, walking out of a beautifully crafted cathedral, and casually passing the Panthéon, La Sorbonne, and a great view of the Eiffel Tower- all on my short stroll back to the hotel. And I was filled with so much gratitude as I finally felt, even for only a short while, at home.