The first week in France has ended and I can finally begin to organize my thoughts on all of the things that have happened thus far. The first week in France was spent in Paris with the goal of helping us to get accustomed to hearing and responding to French on a daily basis. Coming from a country that speaks one language to a country where they speak another can be jarring, and reflecting on this first week in many ways it was. Transitioning from English to French is hard and I was exhausted the first two days from working so hard to understand what people were saying and communicate. All of our tours and visits were done in  French, we spoke French at all of our meals, everything we were given was either written or said in French! In short it was a very quick transition into a total immersion environment!

When I first arrived I felt a bit overwhelmed, there are certain questions I feel that every person who studies language asks themselves and for me, the two main themes running through my mind were do I know enough French for this trip, and many what if questions. By day 3 in Paris those thoughts were mostly gone; I had already completely butchered the pronunciation of a word, but I had succesfully asked for directions and participated actively in conversations that relied on my use of he language!

We really did begin to use the language as soon as we arrived; our first activities in Paris forced us to use French. We started with a walking tour and a Seine River cruise. This was followed later in the week by seeing a French play and  visits to places like the Musee D’Orsay, the Louvre, The Pompidou Center and the Eiffel Tower. It was really an ideal week in Paris and a great opening to our summer term in France. This first week gave all of the students in the program a chance to adjust to the time change, start thinking in French, and let go of some of the nerves about studying abroad. After all of the activities and exposure to language and culture I felt much better prepeared to head to Tours and further improve my french.

All of that being said, my first impressions of France are that is a beautiful country with a vibrant culture. There are so many things to see and do and so many people who are there to encourage you to speak and learn regardless of whether you make mistakes. Learning is a constant process and mistakes help us learn.

Whenever one travels abroad there is a period of adjustment and many people go through culture shock. At this point in time I am still very much in the honeymoon period of being abroad and I am loving all of my experiences and what I am learning about myself, this country, and its language.

I’ll be updating you on Tours soon. À bientót! 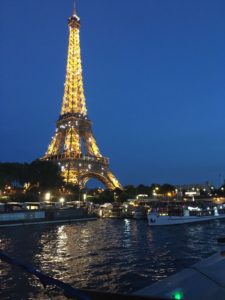 View from the Seine: Eiffel Tower at Night 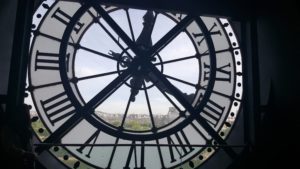 View of Paris through Clock in Musee D’Orsay