Abroad in Germany – Berlin and Munich 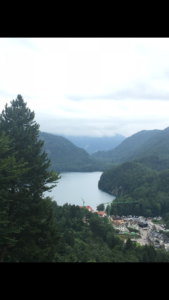 The view from Neuschwanstein Castle in the countryside near Munich

During my time abroad, my language skills have improved significantly in certain areas. Though I continue to struggle with listening comprehension, conveying messages and exchanging in casual conversation has become much easier. My time at Humboldt University has given me an opportunity to interact with people from all over the world, and it has also provided me with many opportunities to experience German culture and city life in Berlin.

Though I was initially concerned with culture shock, my concerns seemed to be unfounded. I have found it surprisingly easy to adapt to life in Berlin with my somewhat limited German vocabulary. I have found that the key to easy communication is to speak as simply as possible and to search for keywords in the sentences of those you communicate with.

I recently finished my time in Berlin, and my group has now traveled to Munich in order to see another side of German culture. English is less widely spoken in Munich, so language skills are a bit more important, but I have gotten by so far without many problems. During our time in Munich, my group will be traveling to various locations in Bavaria outside of the city, such as Dachau and Nuremberg. We recently visited Neuschwanstein Castle, and the trip there has been my favorite experience in Germany so far. I was able to see some of the Alps, and visited a few different Bavarian villages. In total we saw three different castles, with Neuschwanstein being the final stop. After this trip, I am excited to see what else Munich and the rest of Bavaria have to offer, however, I am also looking forward to returning home soon.