It has been about two weeks since I came back from Spain. My last couple of days in Spain were spent exploring the capital, Madrid. While in Madrid, I toured the Royal Palace. My favorite part of the tour was seeing the Royal Armory. The Armory has a wide variety of weapons and armor used by the Royal Family throughout history, such as armor for horses, lances, shields, etc. While there, I also saw all of the extravagant rooms of the palace, and it was one of the most extravagant buildings I have ever seen. Every room was covered in gold and exotic materials. After touring the palace, I walked around Madrid for a few more hours. There was a large festival going on while I was there, so it was awfully crowded, but I was able to see the gardens, Plaza del Sol, the Senate building, and the Congress Building. However, because of the festival it was much more crowded than usual, and it was hard to find where I was. Overall, I had a good time in Madrid. After exploring Madrid for the day, I went back to the hotel to prepare for my flight the next day. In the morning. I woke up, went to the airport, and took my flight back to the USA. Overall, I enjoyed my time in Spain, and made a lot of new friends. I sincerely enjoyed my study abroad experience, and would recommend it to anyone studying at The University of Alabama. 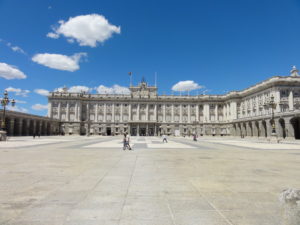