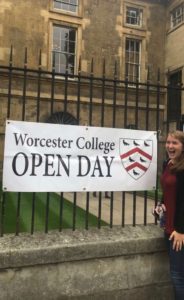 The gates of Worcester College (pronounced “Wuh-ster”), where I’ll be studying English Arts and Literature this summer. I toured the campus in advance of my move-in on one of only three “Open Days” they provide to the public throughout the whole year.

While it was no gut-wrenching decision to study abroad (it actually makes me giddy every time I think about it), the oncoming arrival of my program at the University of Oxford is still nerve-wracking and exciting because it represents the culmination of a year’s worth of planning. Just two weeks after arriving at the University of Alabama to begin my freshman year, I started organizing all the factors necessary to make this adventure a reality for me. All of the big planning items have since been finished, and I’m now learning the little intricacies and tiny cultural details associated with this program. Two weeks ago, I printed out several of the forms and passes necessary for my time at the University of Oxford and discovered that what constitutes our letter-sized page is equivalent to a slightly different standard in England where the margins differ by enough of a fraction of an inch to mess up alignment when printing in an American format. Names like “Tottenham” and “Paddington” are becoming regular facets of my vocabulary as I try to master the transportation systems in nearby London. The exaggerated ideals of a merry, jolly old England with soft twilights, beer- and cod-filled pubs, posh boarding schools, and creeping ivy become more solid possibilities (Americans are such fools for a romantic idea of England and I’m not excluded from this).

It’s been interesting preparing for this trip including considerations both large and as small as these in light of all the recent news surrounding the London area and the United Kingdom. These range from Parliamentary divide, unstable positioning on the world stage as a member of the European Union, the resulting falling currency values, several terrorist attacks, and heartbreaking apartment block fires. However, I think that the onset of all these events right at the beginning of my time in the country gives me a really unique chance to speak to anyone considering an incredible adventure like my own who might be hesitant and have misgivings as a result of these stories. I’ve found that embracing the unknowns of both the area, my new school, and the possibility of good or bad things happening outweighs any potential misgivings I might have had about pursuing this experience. Nothing in my life has compared to this experience even as I’m just beginning it, because it transforms the things I could learn about at arm’s-length into scratch-and-sniff escapades. To be completely straightforward, I certainly still have reservations about some things and I think it would be disingenuous and unrealistic to say otherwise. However, I’ve found the the things I grow concerned about aren’t crime and violence, but rather the anticipation of stepping into a place with shoes, dress shirts, a comma, a shade of blue, a dictionary, and much more named after it. I think that this demonstrates how enriching a study abroad experience can be and how drastically it can build perspective and appreciation for the small things so that we can respond with wisdom when both good and bad events occur on a large scale. I highly encourage anyone considering studying abroad to explore how they can make it a reality. I’m so excited and humbled to get to join Oxford this summer, learn how to navigate all these daunting but exciting traditions, and share my experiences with Bama Blogging in the process!