Upon arriving at Oxford, I was amazed at the beautiful architecture and the main lawn at the entrance of Worcester College. It felt prestigious to be here. The lawns and orchard are some of my favorite spots. They, along with the quaint coffee shops and bustling people walking on the streets rather than constantly driving, give me a sense of relaxation. I feel calm, and it greatly contrasts with a city such as Tuscaloosa that boasts a much louder nightlife. It is difficult finding my way around, because the street signs are not where I am used to seeing them and are also not green, rather stone signs attached to buildings, causing them to blend in with the scenery. Also, many of the beautiful buildings tend to have similar appearances, making it hard to sometimes recognize where I am. This, hopefully, will change as I grow accustomed to the city. My classmates all seem really friendly, and I am happy I’ve met them! Classes are not taught in formal classrooms like we have in America, nor in fancy ornate lecture halls, which was not what I was expecting. Instead, we are lectured in what seems to me like a meeting room of a kind. So far, we have seen many churches and parks, as well as the Bodleian Library. The Bodleian Library was immaculate, and we also saw a section of the library where parts of the Harry Potter films were apparently filmed at. We saw Christ College, which was an amazing building. It had beautiful fields around it and looked just like a castle. So far this has been my favorite place I’ve seen, and I’m sure there will be more to come. I am interested that there are people speaking a whole bunch of different languages rather than just English with a British accent. This makes some sense since Oxford is very tourist heavy. Below is a picture of Christ Church. 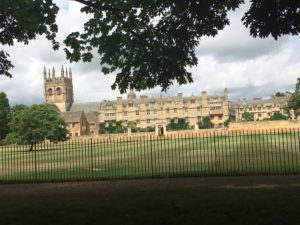