When I arrived in El Escorial, Spain for my study abroad program, I was extremely overwhelmed and jet lagged. I was nervous and afraid of making new friends, speaking to the locals, and classes. Still, I couldn’t stop looking at the breathtaking views of the monastery outside my dorm room and in the plaza. I had never seen anything like it. The architecture and the gardens were stunning. My first photo was a panorama of the monastery. The monastery and the other cathedrals and museums that we would end up visiting were my favorite parts of my trip. Europe has such a rich, ancient heritage compared to the U.S., which is a baby in comparison. At Real Centro Universitario Escorial my classes lasted for two hours each, and I realized what a short attention span I have. It was hard for me to pay attention, especially since there was no air conditioning and I always seemed to be exhausted. The grades I received didn’t make much sense to me. The grading system in Spain seems arbitrary. After classes were over for the week on Thursdays, my group would go on excursions. In each new city we would visit a cathedral, some type of museum, and shopping areas. We took tours of several cities and even stayed the night in a five star hotel in Cordoba. There we got to watch professional flamenco dancers and experience some of the culture and nightlife. We also had a free weekend to travel. I traveled to Barcelona. It was terrifying yet thrilling to travel in a foreign country without someone helping me plan or find things or make travel arrangements. I did, however, have several friends traveling with me. Barcelona was by far my favorite city I visited. The locals in Spain are similar to us except that they stay out much later and much more often than we usually do. I also learned that some Spaniards (mostly in big cities) will push you if you are in their way, and will be vocal about their opinions if you offend them. The people in San Lorenzo de El Escorial (the town we stayed in) are generally very friendly and used to tourists. The most common language spoken in Spain is Spanish, although there are several dialects. Almost everyone in Spain at least speaks Spanish. I have a pretty good grasp of the language, so I didn’t have many problems with language barriers. My friend had a couple of funny misunderstandings when speaking to locals. I tried my best to practice Spanish with locals as much as I could. In Spain, I saw the history through the art and architecture. I heard the swallows that swarmed the monastery all day, the waves on the beach in Barcelona, and the thick Spanish accent that was difficult for me to understand at first. I tasted more pork and potatoes than I ever had in my life. I smelled the Spanish roses in the gardens outside my dorm and the oranges that grew everywhere in Cordoba. I touched the tombs of generations of Spanish royalty, and the very top of the monastery at which normal tourists can only look from below. By the end of my trip, I was packed and prepared for the long journey back. I was somehow able to fit all my souvenirs and belongings in my one small suitcase and backpack. I had seen Spain, learned some Spanish, and was ready to return home and rest. 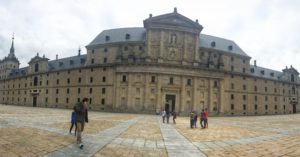