One of my first thoughts upon arriving in Berlin was that it isn’t much different than any other large American city. Tall buildings, lots of people everywhere, a confusing public transportation system. On the surface, it seemed like I hadn’t even left. But as we made our way to our housing, it became clear that I was very wrong.

The biggest indicator was the language: everyone was speaking German. Even though I’ve been studying the language for a while, it is still a shock to hear nothing but that language. It was especially frustrating that I was struggling to understand, despite how much I’d learned in the past. As the days progressed and I began my language course here, it got much easier to interact with my environment in German: I could speak and understand better than I ever had.

The classes here have been intense, but worth it. The language course focuses on immersion, so the class is 3 hours every weekday to help ensure you are getting that practice in with the language because it is easy to speak English when you are not in class. My culture course has also been intense, if only because we have spent most of our time talking about Germany during World War II.

My favorite thing I have discovered about Berlin so far is the food. Everything I have eaten has been amazing. The coffee, the Thai food, Currywurst, Döners, and many other items have completely blown me away, not to mention the actual traditional German food. I did not expect everything to taste so good here.

As I wrap up my time in Berlin and pack for my week in Munich, I am starting to realize how much I love this city. I have found a favorite coffee shop, a favorite restaurant, and I have become close friends with the other people in my program. I can hardly believe that my trip is almost over. This has definitely been something I will never forget. 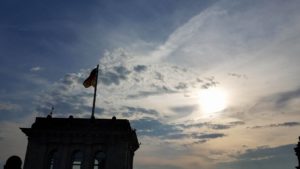 (Photo: From the top of the Reichstag Building in Berlin at sunset, with the German flag)