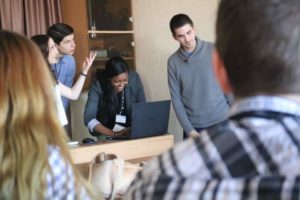 Setting up for our presentations at the University of Nis 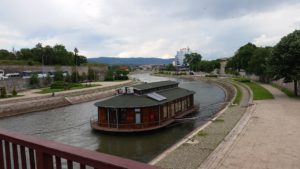 The Nisava River flows through the Nis city center, between the town’s fortress and downtown

We have returned to Belgrade this week after spending a full week in Nis with our hosts. Nis is a mid-sized city in the southeast of the country. During my stay, I lived with Petrana who is a college student that has a small loft a little ways away from the center of town. Our hosts were nothing if not gracious. They welcomed us into their homes with no hesitations. I felt that their kindness was representative of the spirit of Serbia: that foreigners may be peripheral but friends are so for life. I was continually impressed by their desire to accommodate us in any way possible. For the entire week, they escorted us to events, sat with us at coffee hours, translated almost constantly, and answered all of our incessant questions.

The students really knew a great amount about their homeland, and I loved their enthusiasm for sharing with us. The first-year students and hosts went with us to historical sites and natural landmarks, and they provided a general wealth of historical and political context. We were educated about several topics in Serbia, and we learned more about the days of the Ottoman Empire; the brief Kingdom of Serbs, Croats, and Slovenes; the former Yugoslavia; the wars of the 90’s; and modern Serbia’s developing relationship with the European Union.

Many times we spoke about social issues during casual conversations, and we were also able to reflect about challenges in the United States.  I certainly gained a better sense of daily life in Serbia. It was also interesting to learn that their perspectives of Americans had changed from their interaction with us. The students also organized a formal debate, and we each gave presentations at the college. Our cohort presented on university life at Alabama, social movements on campus, and the 2016 presidential election, while they taught us about Serbian protests in recent decades and their own 2017 presidential election.