My journey home was, to say the least, arduous. A long and tiring time-zone-hopping, people-dodging endeavor. I left my Amsterdam hostel (I travelled around Europe a bit after my study abroad program ended) at 3:25 A.M. local time to catch a 3:45 train to the airport. My flight was to Lisbon and left at 6:15, only for me to catch my flight to Boston at 10 Lisbon time. I arrived in Boston at 3 P.M. EST, but my body thought it was 8 or 9 P.M. When my travel was all said and done, and my grandparents picked me up at the Columbus airport later that night, I had been awake for 25 hours. Time zones are wonderful constructs that keep the world running, but only when you stay in one for an extended period—travelling through them is a WHOLE ‘nother story. The foremost thing on my mind as I stepped into the Boston airport was sleeping in my own bed, followed closely with, “I hope the customs agents repack my bag for me.” I had never been through customs before, and I had only heard nightmares. In fact, my experience was a breeze and my bag wasn’t opened a single time. Pretty miraculous, as my sleep-deprived brain would not have done well with having to repack.

I was happy to be back in the United States. Travelling abroad gave me a new sense of what it meant to be an American, or a member of any nation. The people around me were Americans—they were my people. Similar values, the same language, etc. It made me feel good inside to be amongst a large group of Americans again.

And then I heard it. That name. Trump. Of all things, why did I have to hear political talk surrounding me in the first 5 minutes of being back in my own country? Of course, I had heard it in Europe, but there it was different. Political talk was more respectful, a true back-and-forth of ideas, listened to and respectfully refuted. I suppose it was because the Europeans I talked with didn’t have to live under the Trump Presidency. He was more of a crazed old man than a president. In the customs line at Boston Logan, the tone was harsher. It was more of a tirade of abuse than a political discussion. The talk, or tirade, brought me down from my post-arrival high. Then I started wishing I was in Germany again. The polite and accepting people, the cleanliness of the country, the cheap grocery costs, the tasty food, the wonderfully connected and punctual public transportation system… I loved it all, and wished I could be back there again. Study abroad changed the way I thought. It opened me to a new way of living, one more frugal, less wasteful, and healthier than I had before. It made me more interested in world events and the goings-on of Germany, and made me want to learn more languages. I felt boring as an American in Europe because most Americans can only speak English, while most Europeans can juggle two or three languages. I feel like learning another language is like becoming a member of a secret club. I think it would be a grand time to be a member of many secret clubs.

I felt generally at-home again immediately in the U.S., but public restrooms, grocery stores, and eating out gave me a bit of reverse culture shock. When Vincent Vega says in the opening scene of Pulp Fiction that the little things are different in Europe, he’s right. Bathrooms are bathrooms, grocery stores are grocery stores, and restaurants are restaurants, but they’re all just a bit different than their United States counterparts. Public bathrooms in Europe must sometimes be paid for, are more private, and the toilet has a slightly different design: two buttons (altering the amount of water flushed), instead of one handle. Grocery stores don’t have baggers, and plastic bags cost money. Many more European shoppers bring their own reusable grocery bags with them than Americans do. Eating out at a restaurant in Europe is a more relaxed affair. You generally seat yourself, and the waiter ambles over to get you a drink. Water must be paid for, which is still a point of contention for me, but if all you want is a drink, that’s perfectly fine—feel free to buy one and sit for hours. “Being cheap” is not something a European diner need worry about, nor is there any worry about taking up a seat. American waiters see tables as needing to be filled and then flipped, maximizing the amount of money made each night. European dining is much more about the experience and the community one creates over food. The final little, yet large, difference about European dining is tipping: waiters don’t expect a tip! This was great for me, as I was on a budget. Tipping became much more of a symbol of thanks, than an expectation. I liked that aspect.

As for future study abroad students, what I can tell you is this:

a)    Pack light. I packed light, bringing only a backpack, and yet I still could’ve packed even lighter. I’m a guy, so maybe girls will need to pack a bit more, but no matter your gender, attempt to minimize the amount you bring.

b)    Speak the local language. It’s embarrassing, and difficult, and sometimes you don’t want to do it, but try to speak it as much as possible! The more you do, the better you get, and it’s a fun challenge, too. It also gives you a more immersive study abroad experience.

c)    Enjoy it. Your study abroad program is meant for you to learn, but don’t simply focus on the classroom work, or the journals, or the research project your professor(s) may have you complete. Get out and see and experience the place you’re visiting. Learning can have many meanings and many sides, including the hands-on learning that only meeting locals and experiencing the culture can bring. Your program will end sooner than you think, and the worst thing that can happen is for you to go back to the United States thinking, “Man, I wish I had done more.” Seize the time available in a completely different culture, and make the most of it. 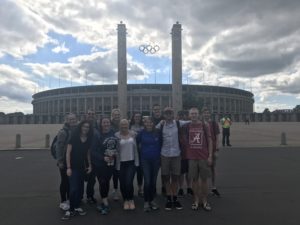