As the season has changed from summer to fall, there are a lot more tourists in Kyoto. According to my Japanese teacher, they come to visit many of the temples and shrines that Kyoto has to offer. But also to see the ‘紅葉’, or Autumn leaves.

At first I was skeptical of just how many people would be here to see the fall foliage, but it turned out to be a lot more than I expected. Every day, the bus has been packed with people traveling between Ryoanji and Kinkakuji. So my friends, who also live in Utano, and I decided to check out the Autumn leaves for ourselves.

Needless to say, we weren’t disappointed by them! 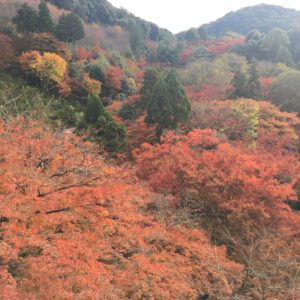 One of the first places we ended up visiting to see the leaves was Kiyomizu Temple. It was a little far from the dorm, but because it was still within the city limits, we were able to use our bus passes to get there. Unfortunately, the temple itself was still surrounded by scaffolding as they are working to restore it. But the view of the leaves was still quite beautiful. And we got to try some ‘Kitsune Soba’ for the first time! 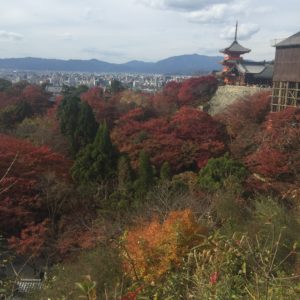 The view from just behind the temple. You can see a bit of the scaffolding in the image. 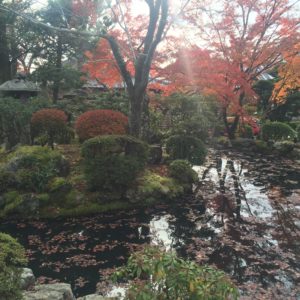 The pond we passed on our way back towards the main street from Kiyomizu Temple.

The next place that we visited was also rather famous for it’s fall leaves, but it wasn’t nearly quite as busy as Kiyomizu Temple had been. It was also rather far away, requiring us to take a bus and then hop on a train. But it was entirely worth it for the view. This place, of course, is Rurikoin. 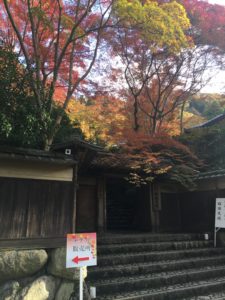 The entrance to Rurikoin.

Admittedly, it was kind of expensive to go in. But because they offer special discounts for students, I high recommend it to anyone who decides to study abroad, or visit, Kyoto in the future. As it is much smaller than Kiyomizu Temple, there was an entirely different feeling about it. It was hard not to feel calm when we sat on the floor and simply watched outside the window! 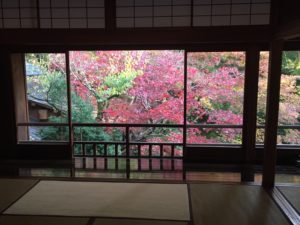 One of the views from the many windows in Rurikoin.

Given how beautiful it was there, it’s hard not to want to go back. If I get the chance, I’d really like to go see how it looks in the spring, when all the flowers are in bloom! 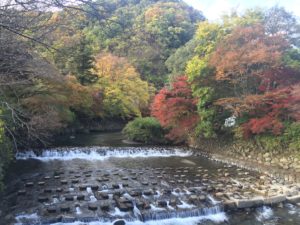 Crossing the bridge to get to Rurikoin. 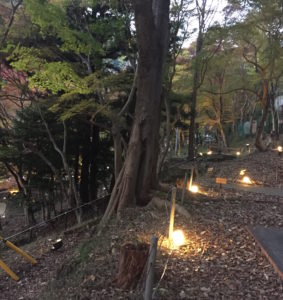 Forest near Rurikoin at night.

But, aside from hunting down fall leaves to enjoy, things have gotten rather busy here. Between midterms, all sorts of fun holiday parties, and a planned trip to Tokyo, it seems like there is always something going on. And my dormmates have all been so wonderful that I’ve been able to enjoy every minute of it — except for maybe the midterms bit.

And now, with Christmas coming up, our RMs have helped us set up a Secret Santa event so we can all trade gifts on Christmas! They’re also planning with us so that we can buy a proper Christmas cake and, following in Japanese Christmas tradition, get ourselves some KFC!