It’s been unbelievably fun here in Japan ever since I arrived in September. At first it was a little difficult to adjust to everything, and I’m still sad that fruit is so expensive to buy… But thanks to everyone living here at Utano International House, my time here has only gotten better! 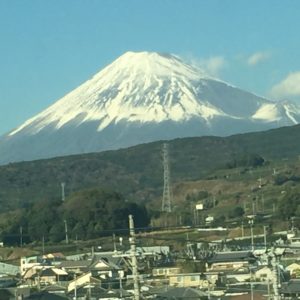 Mount Fuji seen from the Shinkansen!

To start December off, I spent a weekend in Tokyo with some friends, while also meeting up with a fellow University of Alabama student studying at Meiji University! It was so much fun! But three days wasn’t nearly enough to do everything that is in Tokyo; I’d very much like to visit it again before I head home in August!

Since we took the Bullet Train (Shinkansen) back from Tokyo to Kyoto, it was only about a 2 and a half hour ride. Thankfully, since it was rather clear that day, we were even able to see Mount Fuji from the train as we sped by! My phone pictures don’t do it justice, but it was beautiful! 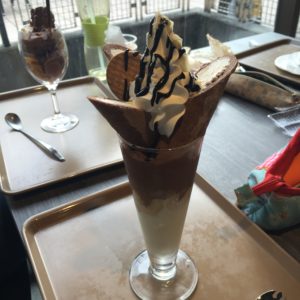 Coming back to school after visiting Tokyo was a little sad, but my fellow Japanese Language Track classmates made it much easier for me. Lately, everyone seems to have gotten much closer; it’s always fun to chat with them after classes and walk to the bus stop. But the best part was definitely getting to visit the cafe on campus and order some desserts! They looked so fancy! They weren’t overly expensive either, which was nice for my wallet.

Of course, it wouldn’t be December without some sort of party for the holidays, so everyone in the dorm arranged for Secret Santa! On the 23rd we all exchanged gifts with one another. And for Christmas Eve and Christmas Day we all got together and watched some movies and played video games! Though we weren’t able to go home for Christmas and see our families, it made staying in the dorm for the week much more fun! And now everyone is planning our party for New Year’s Eve as well!

I can’t wait to see what the new year holds for all of us in Japan!