After being in Seville for a few months now, I can without a doubt say that I picked the perfect place to study for a semester.

Seville is not exactly what I imagined, as I began my adventure in Madrid for orientation. However, unlike the city-like bustle of Madrid, Seville is covered in palm trees, mosaic tiles, and sunshine. It took me a while to gather my surroundings, as everything in Seville is centered around the beautiful park that I have learned to utilize as a shortcut to other destinations. Google Maps was my best friend for the first two weeks of my experience, while I have learned the ins and outs now. I was at first nervous because things seemed to spread out, 30 minutes walking from one place to another seemed like the norm. However, now, I know where everything is, Google Maps is rarely used, and biking has become my new best friend. It was intimidating not having my surrounding memorized at the beginning, which was also nerve-wracking.

My first meal in Seville was one to remember. While I have studied Spanish for years, the food in Seville, like most of Spain, is not like the food we have studied in various courses. The idea of “tapas” is taken to another level, something that I was not prepared for. It makes it easier that almost every menu in Seville is overflowed with the same types of tapas, yet each restaurant has their own take on the traditional cuisine. At first, I was only ordering the same thing everywhere I went, simply because I was too nervous to order something, mess it up, and regret my choice. Now I have tried almost every single traditional dish that Seville has to offer. The food has been one of the biggest differences compared to the United States, but also one of my favorite things about Spain.

My apartment could not be better located in Seville. Tucked away two blocks from my host school, my roommate and I live in a quiet, family driven neighborhood that is surrounded by the park. We are feet away from a grocery store, bank, pharmacy, and small farmers market, all of which have found their way into our daily routine. There are many small, local restaurants that are crowded from noon to midnight and continuously serve fresh tapas. This is what makes Seville special, the neighborhoods. People are rarely cooped up in their apartments; they are outside, enjoying each others’ company, talking in the streets, or carrying groceries home together. Spain is one of the most lively places I have ever encountered, something that I have both cherished and will miss.

Classes abroad have been very different than those in the States. In Spain, the grading scale is a rank of 1-10, 10 being the absolute best. Here, a score about a 4.9 is considered passing. If you make a 7.5, you are doing very well in the class. This is something that I have had to get used to, as Spanish professors use this grading scale even though we are Americans. I have had to adjust my study habits and my test taking skills. Spanish tests, that are the short answer based, do not need lengthy, drawn-out paragraphs. They are looking for the main points, as in bullet form. Nothing compared to the United States. Definitely an adjustment, but the teachers abroad are patient and willing to work with you.

As for excursions, I have been fortunate enough to explore so many places! With my program, we have traveled to Madrid, Toledo, Gibraltar, and Lisbon! All of which were incredible and such eye-opening trips. With our program, we had many tours lined up that allowed us to understand the history from a local’s point of view, something that you do not always get to do while on your own time. We saw many churches, museums, and historical sites. On my own time, I traveled to Bilbao, Verona, San Marino, Milan, Florence, and Munich! I had the opportunity to explore various places with different cultures, something that I will cherish for a lifetime. I was accompanied by friends from my program, and friends from home that I had not seen in months. I wanted to explore the world the right way, buying the cheap flights, using the public transportation, and really immersing myself in the culture. In Italy, my friend and I ate like locals and walked a minimum of 25,000 steps every day exploring the ins and outs of the cities. San Marino, with its classic towers, took the cake. I had never experienced such a small place that had such a big personality.

The locals that live around me have welcomed us students with open arms. They are always interested in our own culture, working on their English as they ask questions about life at home. In my apartment building, we are surrounded by locals. They stay up late, eat dinner at 11:00 pm, and hang out downstairs at the local bar. They are everywhere, full of energy at all times. In the mornings, on my way to class, I see the same people every day, grabbing an early morning coffee and Tosta before heading to work or dropping their kids off at school. Spaniards are rarely in their homes, they enjoy the outdoors (even during the 4-week rainstorm that took over March). One of the major differences between the locals and Americans is their use of time. Spaniards are known to be slow, soaking up each moment of their day, while we Americans run to class, power walk through the park, and live life in auto-pilot. Spaniards live life in slow motion. There is never a rush, two hours at a coffee shop is normal; they wear dark colors; they always have a jacket; they do not smile on the streets or make eye contact; they are their own type of human.

The language in Spain is Spanish, but not the traditional Spanish you learn in school. In Spain, the locals stick to the Spanish that includes the vosotros form and they have an acquired “thuh” sound. Sevillanos cut all of their words short. “Gracias” is “grathia”, “por favor” is “porfa” and “hasta luego” is “luego”. They also talk FAST, as in very, very, fast. While I have been studying Spanish for years, and I even minor in it, I still have to ask them to repeat what they are saying at a slower pace to keep up. They usually laugh at me for a minute and then help me out with no worry. I continue to study Spanish here abroad, which has been very helpful. And, just going to restuarants and out to local areas has given me the opportunity to practice. Real world experience is key to perfecting a language.

My study abroad experience, in five senses, can be summarized by sight, taste, hear, smell, and feel. I see color, I taste tapas, I hear laughter, I smell coffee, and I feel sunshine. Spain is one of the most magical places I have ever been, and leaving will be one of the most bittersweet experiences.

As I prepare to go home, I have begun to realize that my life is going to be very different in the states. I will no longer wake up early, go to sleep VERY late. I will no longer eat dinner at 9:00 pm (and that is pretty early here!). I will not be able to walk next door to my grocery store, or even NOT own a car. I have to realize that the efficiency of my day is going to change dramatically. I have begun packing my things, leaving behind the sweaters that have been destroyed by the wash, as I wore them almost every day. Yet, I pack the sneakers I have worn since day one, the ones that have taken me from point A to B, in the rain, snow, and mud. They will forever be my “abroad shoes.” There are no words to explain how much I will miss this place, the people, and my life here. I have taken a step back and lived in the moment, something that is difficult to do in Tuscaloosa at times. I have hit refresh. Yet, I am eager to get home and live out the attitude that being abroad has instilled in me. I have a better understanding of the world and the people that are apart of the dynamic cultures surrounding us. I can without a doubt say that being in Spain for these past four months has given me a new appreciation for the little things; my dryer, normal sized pillows, and peanut butter. I hope to return to the States with a new mindset, ready to take on Senior year. And with that, I hope to return to Sevilla in the future, a place that I now consider my second home. 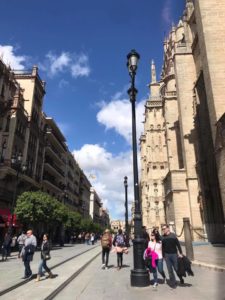 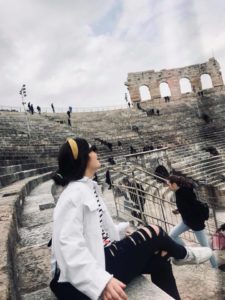 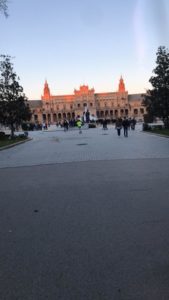