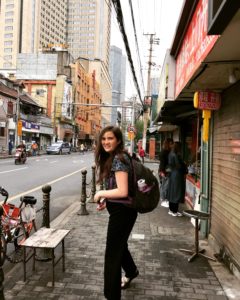 This is the first picture that was photographed of me abroad. It was taken by one of my friends on the trip with me after we had done tai chi in a park with some of the locals.
Everyone in the program had just arrived in our first destination, Shanghai, on our study abroad program the day before. The time difference caused a lot of us to wake up early. We had a lot of time to explore before our first classroom session, so two of us decided to explore around our hotel. We stumbled upon the Shanghai Civilized Park that was nearby.
Historically, the park that we discovered was located in a part of Shanghai that was the designated area for stateless refugees. The area was bordered on the west by Gongping Road, on the east by Tongbei Road, on the south by Huimin Road, and on the north by Zhoujiazui Road. During the time of Nazi persecution from 1937 to 1941, thousands of Jews fled to Shanghai. The Japanese occupation authorities, at that time, labeled them as “stateless refugees”. They set up this area that was designated for them as a means to restrict their residence and business. The park was a standing reminder of that past.
In the park, there were four groups of people doing different types of tai chi and listening to different recordings while doing it. Some recordings were of just instrumental music. Others appeared to be instrumental music with a voice instructing everyone in Chinese, but we couldn’t tell because we can’t understand Chinese. It was amazing to see all these people so early in the morning knowing exactly what to do without instructions, moving together as one, and so disciplined.
It was so incredible. We both had taken some tai chi classes back in the states, so we decided to try and join in. We stood next to a group of women that looked nice. Compared to them, the little knowledge that we had was very insufficient, and we definitely were not as skilled as they were. I think that they sensed this because they slowed down in an effort to help us and non-verbally instructed us to try and copy them. It was one of the coolest experiences of my life. I was humbled that these ladies decided to help us. I can’t put into words how incredible it was to gather in a park with all these people who just get together in the morning. They don’t really speak much to each other. They just do tai chi as a community. It, also, amazed me about how much can be said through no words being exchanged, just movements. That experience will always hold a special place in my heart. Even though I’ll never see those ladies again or ever have the chance to actually speak to them, the experience showed me the beauty of community and how those ladies just accepted us into theirs even though we were complete strangers.
When the music had finished, we thanked the kind ladies and went to head back to hotel. On our way back, I was so excited for the day and happy that I unconsciously started sort of dancing while walking back to the hotel. My friend told me to turn around in the middle of a twirl, and she snapped this picture. I think this is probably one of my favorite photos from my entire study abroad trip. It’s not just a picture of me in the streets of Shanghai. To me, it symbolizes my first cultural experience abroad. The first time I realized how beautiful and special community is, and how beautiful small moments in time like these are.