Off to Asia! Pre-Departure!

I chose to study abroad because I have never truly traveled outside of the United States for an extended period of time. I hadn’t intended on going to China or Vietnam, but this class gave me a reason to go. Location played most into my decision on where I went because I wanted to visit a location I might not go back to. China and Vietnam are fourteen hours via plane, and Europe is a much easier trip to make. I also wanted to experience a culture shock. I got one.

I had to repack a few times. I started with too many pairs of clothes and a suitcase that would have been at least fifty pounds. I packed a suit, numerous pairs of pants and shorts, shirts, polos, additional dress clothes and shoes. I thought I needed much more than I actually needed and forgot I could do laundry at the hotel. I went through local websites and planned out what I wanted to see while overseas. Like I mentioned earlier, I don’t know when the next time I’ll be back to China is, and I want to see as much as I can before I have to leave. I don’t want to miss a local landmark because I didn’t know about it. I had to purchase a VPN to access American websites. China blocks American financial services websites and social media, and I wanted to be able to manage my finances while abroad.

I wasn’t too nervous about going overseas. I was more excited than anything else because diversity of thought is pretty important to me. I wanted to see a group of people that had not grown up in a democratic country, and I wanted to learn their view of the world. China has grown from 84thlargest economy in the world to 2ndin about thirty years, and this rapid transformation was something I wanted to witness. This class allowed us to visit factories, innovation zones, and experience the local culture in a short period of time giving us a taste of the future world’s leading economy.

I hope to gain an insight into this market’s mindset. I want to learn their overarching cultural values, morals, and guidelines. I wanted to learn how to contribute to a global marketplace versus looking solely from an American’s point of view. With 1.4 billion people, China will continue to grow as the world’s leading economy. I want to understand cultural values and mindset so I can contribute to a company and help it grow through international expansion. 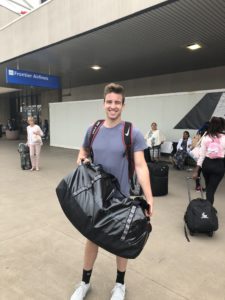