Shenzhen and Shanghai. Off to Vietnam!

China is incredible. I can’t say enough about the country. However, my view is biased as we only saw the high-tech cities of Shanghai and Shenzhen. I stepped off the plane and the temperature was a bit cold, there was a small drizzle, and lots of fog. It felt like an eerie futuristic movie where the skyscrapers were advertisements. There are so many LEDs on Shanghai buildings it felt like the city never slept. I looked out my window and saw a world where everything was new, high energy and exciting.

I want to cover Shenzhen in this blog post. Shenzhen was a former fishing village with a population of 30,000 in 1980. Today there are over 14.4 million people in the city and leads China in innovation. We spent three days in Shenzhen, and I didn’t want to leave. I wasn’t as comfortable in Shanghai as I was in Shenzhen. I wanted to be near all of the innovation in technology and I was placed right in the middle of it. We went to various incubators, start-ups, makerspaces, and the largest technology marketplaces in the world. The tech marketplace was incredible with over 27 square miles of vendors selling everything from microprocessors to fully built custom computers. You could find any part for any product in the local area and get it delivered within a couple of hours. Products and product cycles can be accelerated because there is no wait to change a design. There’s no overseas shipping time, and you can prototype quickly. We were sent into the marketplace to find pieces for a small robot.

There were about 20 pieces we had to find, and they were pretty tough to find. We don’t speak Mandarin, but we can use WeChat to translate. I was talking to vendors in English and having a full conversation via phone. It was incredible. The toughest part was communicating the right word and the total number of pieces. Most vendors wanted to sell us 1,000 pieces when we needed one or two. Most turned us down. Luckily, we were able to find vendors that would work with us after searching store after store to find the right piece and a willing store owner.

We also were able to see a few makerspaces and innovation. China has been on a big push for innovation and development of products rather than solely manufacturing products for other companies. These makerspaces were less than $100 USD for a year’s worth of space, tools, and other resources to prototype products in a controlled environment. These makerspaces run classes for students, children, and others to learn how to design and produce products. Students as young as 12 can take classes and learn entrepreneurship. The Chinese student studying entrepreneurship will have 6 years of experience on an American child wanting to build a product. The country is truly trying to innovate at a high speed without a world rival.

I had a different view of China when I left. I had this idea of an oppressed country where no one had a view or goal because that’s how communism is taught. Seeing China as a growing economy where companies are flourishing is a new lesson I was able to learn because I wouldn’t have known otherwise. I’m excited to see what Vietnam has in store. Roll Tide! 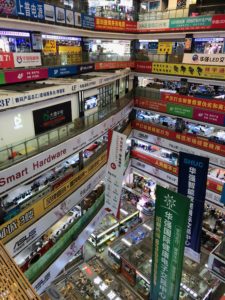