Losing My Luggage in Another Country 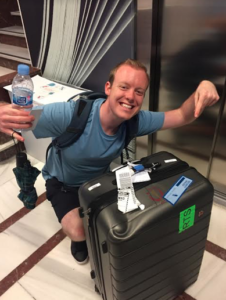 Most pre-departure articles might be about how to fit two months’ worth of clothes into one suitcase, or how to navigate a big airport by yourself, or even how to make all of your travels run smoothly; but this article is about the opposite of all of those things. Yes, anything that could have gone wrong, went wrong during my trip from Pensacola to Paris.

When I arrived at Pensacola Airport at 3:30pm on a Tuesday afternoon, I never could have guessed all that was about to occur over those next twenty-four hours. First, I went to check in my suitcase and it was nine pounds overweight. As an extremely organized person, I did not want to start rearranging everything in my bag that I had just spent two days packing. Nevertheless, I took out more and more stuff, throwing it randomly into my carry-on backpack. This leads me to my first tipfor you all: always pack a few basic necessities in your carry-on bag, like underwear, toothpaste, chargers, an extra shirt or sweatshirt, etc.Not only will it make your suitcase lighter, but also you will have them with you if you need them! Finally, I got my suitcase one pound below the maximum limit and went on my way to catch my first flight to Atlanta.

Just when things got going, they stopped again. My flight to Atlanta had been delayed by an hour. Initially, I only had about an hour and fifteen minutes between flights in Atlanta. But now, with the delay, I would barely have time to catch my connecting flight to Paris. My second tip is for anyway with a time crunch between connecting flights: ask an airline employee at the gate if you can be placed in a different seat, one closer to the front of the plane. This makes is quicker for you to get off the plane and catch the next flight.

You can only imagine how quickly I sprinted all the way from gate B4 to F1 in Atlanta airport in less than eight minutes, only to discover that my connecting flight to Paris had just left the gate! I got rebooked on a later flight, but not to Paris. Instead, I would now fly from Atlanta to London and then to Paris. As upset as I was to miss my flight, I took up this opportunity to fly to London (my first time in the UK) and became excited to see what little bit of Britain I could from the windows of the London Heathrow Airport.

Finally, after nearly twenty-four straight hours of traveling, I arrived in Pariswithout my suitcase. Even though I had flown from Atlanta to London to Paris, my suitcase flew on a different flight from Atlanta to Paris directly. When I landed in Paris and went to claim my suitcase from the missing baggage claim office, they could not give it to me. As it turns out, there were over 6,000 missing bags in the Paris CDG Airport, as their conveyor belt broke earlier in the week, causing mass luggage transportation issues. Without getting into the controversial debate over which airline was responsible for delivering my bag to me, I was told to go onto my hotel, and that my bag would be delivered to me, hopefully soon.

As you can probably guess from the title of this article, my bag was lost somewhere amongst the other 6,000+ bags for days and days and days. Actually, for eleven, YES 11, days in total. I called and emailed the airline every day and waited, waited, and waited some more. By the time I finally got my bag, I had already arrived in Spain, my final destination, to start my study abroad program, UA in Spain: Language and Culture and had been in Madrid for five days. The whole point in writing this was to offer this final tip: don’t let what you don’t have stop you from enjoying your trip abroad.Seriously! I could have let this problem ruin my whole trip. I could have been miserable every day. But I made the decision to make the most of my trip, even when I had the least amount of stuff anticipated.

Regardless of whether this is your first time abroad, or if you are an experienced traveler, there will always be issues and problems when traveling. It could be a delayed flight, or a missed flight, or a trip to a new airport, or a lost suitcase, or all of the above combined into one big mess. This all is a part of traveling, so make the most of it and get out and see the world, even if it’s in the same clothes you’ve worn for three days in a row!