I’ve been in Spain for just over two weeks now, and I could not be more thankful that I chose to come here! I was really nervous when we first arrived, because my flight was quite a few hours late and I didn’t know anyone else doing the program. It was incredible to me that within the first few days everyone was friends with each other – we’re all in this together! Within the first week, we got paired with our conversation partner. This was a student from Spain who is living at the same residence as us, and we get to talk with them every week while they help show us around the city. Talking to someone my own age has helped my learning of the language tremendously. Considering we can only speak in Spanish the entire time here, the first week presented many challenges with communication. Let’s just say we all got a little quieter… But, as the days went on, our confidence grew, and now we have all improved more in a few weeks than in a year of classes. I am absolutely convinced that immersion is the best way to learn a language now. Not only have we learned the language itself, but we have learned more of the slang and phrases used in daily life, so we don’t seem so foreign to the locals. I have also come to know the city well. What seemed like a giant maze when I first got here is now simple to figure out, even the metro! I have a favorite place for coffee, lunch, and studying. The picture I’ve included is of our favorite spot for late night churros and chocolate. Spain is definitely starting to feel like a home to me. 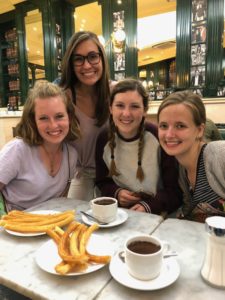