A brief summary: I started out on this three-month, eight-country* journey on May 12, with a ticket to Belgrade, Serbia as part of the Serbia Fellowship Experience. I spent two weeks in Serbia, split between a hotel in Belgrade and a host family in the town of Blace. Then, I had one week before my two-month UA in Spain program began, so I traveled slowly to Madrid with my step-sister via train across Europe, with stops in Milan, Italy, Marseilles, France, and Barcelona, Spain, before arriving in Madrid on June 4. I’m now two weeks in to what will be a eight-week program in Spain.

So now, five weeks in, I think I might slowly be becoming gelato. I have a certain penchant for ice cream (past roommates can attest to the amount of room I take up in the freezer, and friends may attest to numerous late-night Publix runs; here comes the question, is Talenti worth the money? What about when Target is having a two-for-one sale?). This penchant runs rampant in Europe where I can’t go two blocks without facing temptation. Though I have attempted to remain strong in the face of such enticement, my courage has wavered a (embarrassing? No, justified) number of times. Amazingly, both in the group of students with which I traveled to Serbia as well as within the group of students I am now with in Madrid, I have gained a reputation for my love of gelato. (When I traveled with my step-sister for a week, let’s just say that she was not surprised by the amount of gelato I consumed. It wasn’t anything new for her…)

And so, after numerous and overwhelming requests from friends, fans, and colleagues, I present to you The Great European Gelato Tour.

*Do layovers count? A stop in Istanbul, Turkey on the way to Serbia for two weeks. Then a flight to Milan, Italy followed by a train to Marseilles, France (which went through Monaco). Then Spain for two months, with a trip to Lisbon, Portugal (upcoming). I head back to the States with a layover in Paris, France! 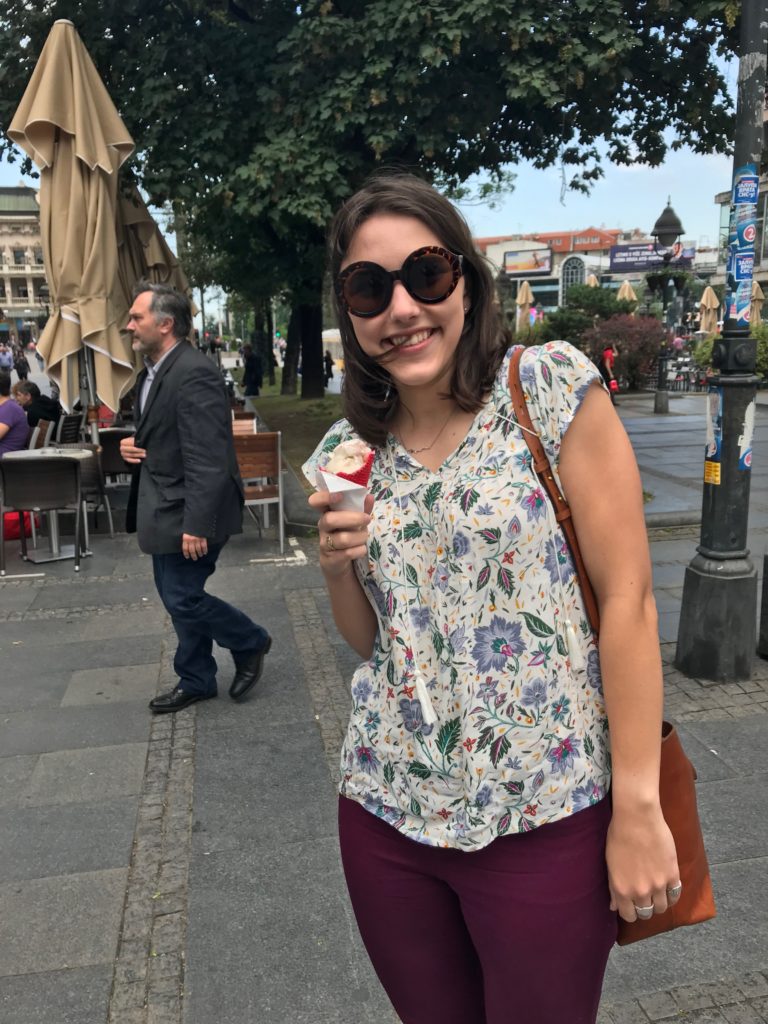 First European gelato of the trip in Belgrade.

Pros: The conversation rate in Serbia made this gelato cost about $2.50, which was easily the best deal of my whole summer thus far. It was also my first real taste of European gelato in a few years. And, I ate it before noon.

Cons: Cone was weird, red, and fruity-flavored, which really disrupted the gelato flavors.

Note: “Plazma” is a gelato flavor that you are only going to find in Serbia (or perhaps Eastern Europe), and for that we can thank Frikom. Plazma is a type of vanilla wafer cookie made by the company Frikom, which also produces a wide variety of sweets, including other ice creams (kind of like a Nestle equivalent). This flavor might scare some folks off by name, but it is absolutely delicious and a must-try when in Serbia. You’ll get a look of surprise from the Serbian working the gelato stand when you order, too. 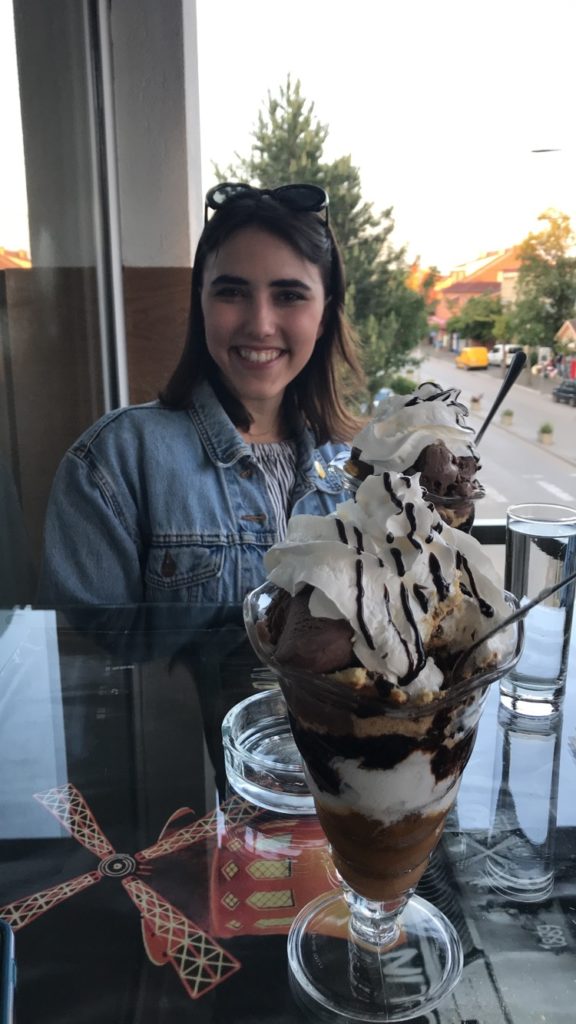 Cons: The first time I went, I secretly paid for both mine and my host sister’s ice cream, just to be nice. However, it really freaked her out, since I wasn’t supposed to be paying for anything! The next time we went, she swore she was going to pay – but unluckily, In Coffee couldn’t make any sundaes that day. (This was because we had eaten so many Sneakers Cups in the past week, they had run out of ingredients. True story.)

Note: Blace was the town that I stayed in with my host family. The town is located in southern Serbia. In the town, In Coffee is located right on the main street (there is also In Coffee Garden down the block, which is the same group but with a large outdoor patio). 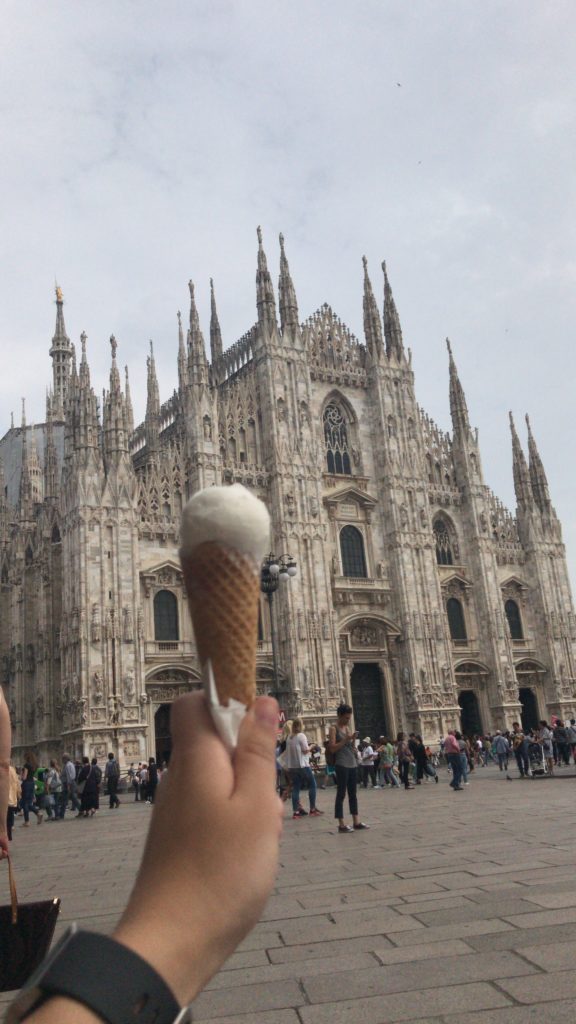 Pros: Discovered a previously-unknown-but-immediately-passionate love of mine for coconut gelato. Views: 10/10. A man was playing electric guitar in the plaza.

Cons: Absolutely exhausted when consuming. Had gotten up at 3am that morning to fly from Belgrade to Milan. After arriving, we took a forty-minute taxi to our Airbnb, which was located very far away from anything in the city. But my step-sister and I figured out the metro and took it down to the Duomo to explore during the afternoon.

Note: Yes, there is a quality difference between Italian gelato and any other kind of gelato or ice cream. Also,  I tried to pay for this in Serbian currency instead of in euros. 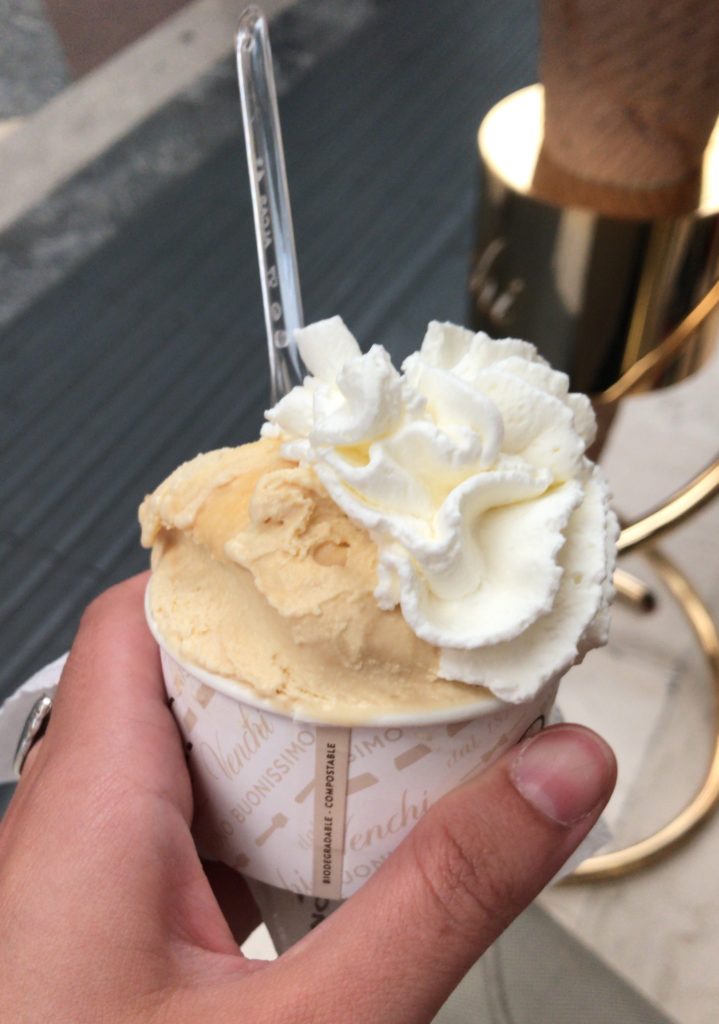 Flavor(s): Creme Brulee with a topping of whipped cream

Pros: This was hands-down the richest gelato I’ve had all summer. It’s located right within the main Milan train station. I ate it after sitting on the floor for three hours waiting for my train. Yes, it was exactly what I needed.

Note: The days that I traveled through southern Europe were the same days that French train workers were going on strike. Luckily, all of my train tickets were for non-strike days, but it still meant that I had to get to the train station incredibly early to ensure that I didn’t lose my reservation amid the chaos. 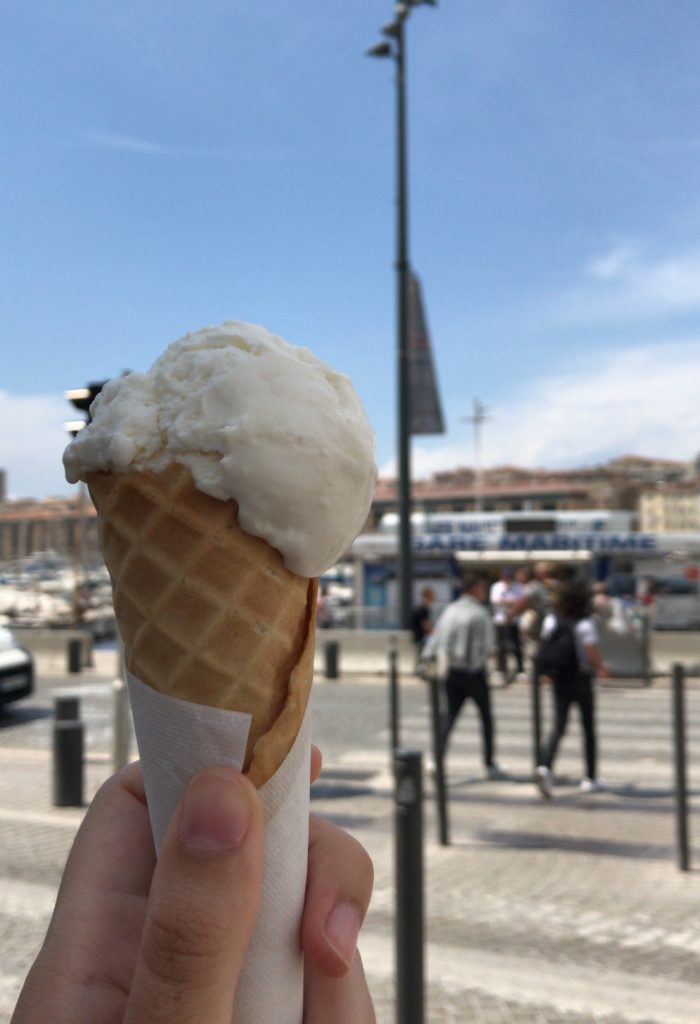 Pros: Marseilles is a hilly city right on the French coast, and we had gotten in a lot of walking before taking this late-afternoon gelato break. It was an absolutely beautiful day and we ate our gelato right on the edge of the Old Port in the city, which is filled with sailboats.

Cons: We had just missed the boat to visit the island of If, which is just off the French coast and home to Château d’If, a fortress famous for being the fictional setting of The Count of Monte Cristo.

Note: This ice cream shop also had a blue “Les Schtroumpfs” gelato flavor — that’s “The Smurfs” in French. I didn’t try it, but my step-sister did. She said it was a mix of bubble gum and cotton candy. If you’re braver than I am, go for it. 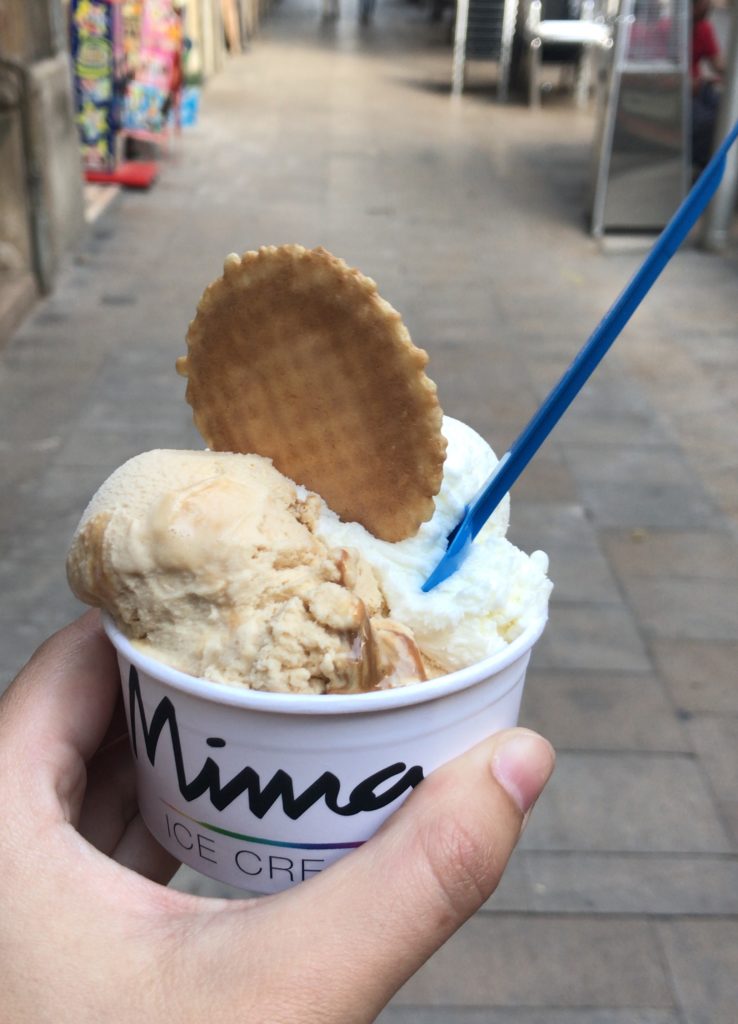 Pros: When they don’t have cones, and so they give you a wafer instead? Pure genius. This gelateria was located two blocks from our Airbnb, and so we passed it every time we came or left. Let’s just say they got a lot of business.

Cons: Honestly the only con is that the shop also served pizza-shaped waffles topped with gelato and chocolate sauce, and I never got around to trying it. I know, I know.

Note: First, in Spain, it’s “helado”. Second, my recommendation would be to (also) eat gelato near Park Güell, which is the architecture park of Gaudí. It’s a hot uphill walk to the park from the closest metro stop, and you’ll want something cold. 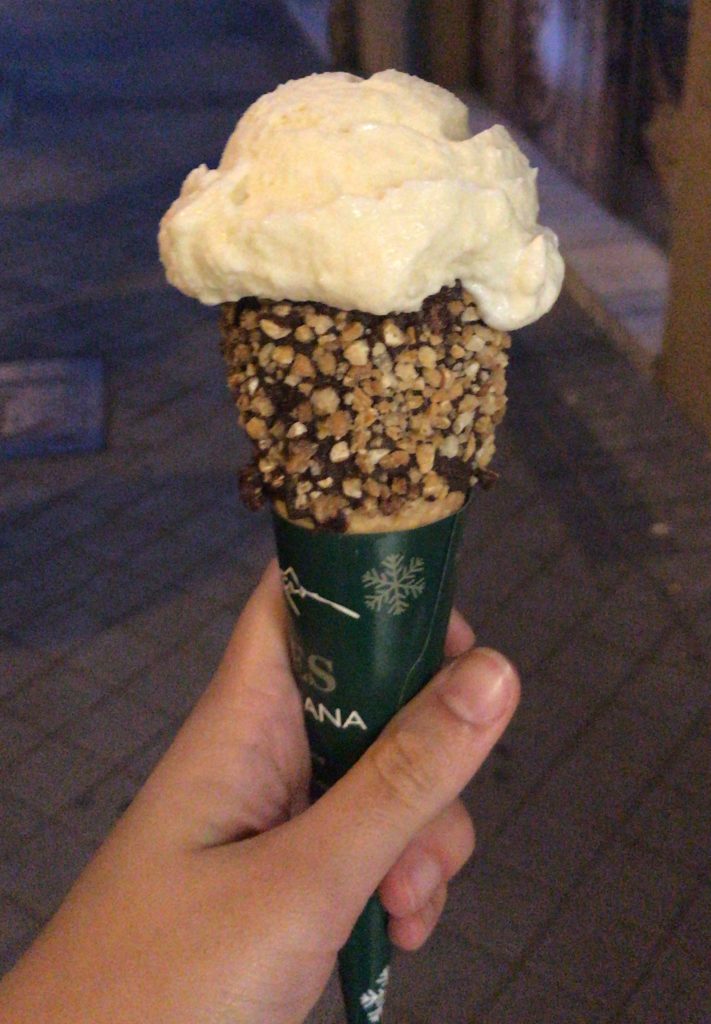 Fanciest cone of the trip

Pros: Literally that there is a helado flavor of Arroz con Leche. I have childhood memories of eating it at potlucks in elementary school. Also, there is one freezer row of ice cream flavors in this shop facing the street – but make sure you go inside, because there are two more freezers with even more flavors inside. Biggest selection I’ve seen all trip.

Cons: A little pricey for the fancy cone, and the shop was out of Arroz con Leche the second time that I went.

Note: Ate this baby after the Madrid-Portugal group game in the World Cup, which ended with a tie of 3-3. It’s a short (as in, dangerously short) walk away from my residency. The ladies who work there think it’s hilarious how long it takes me to make a decision on what flavor I want. 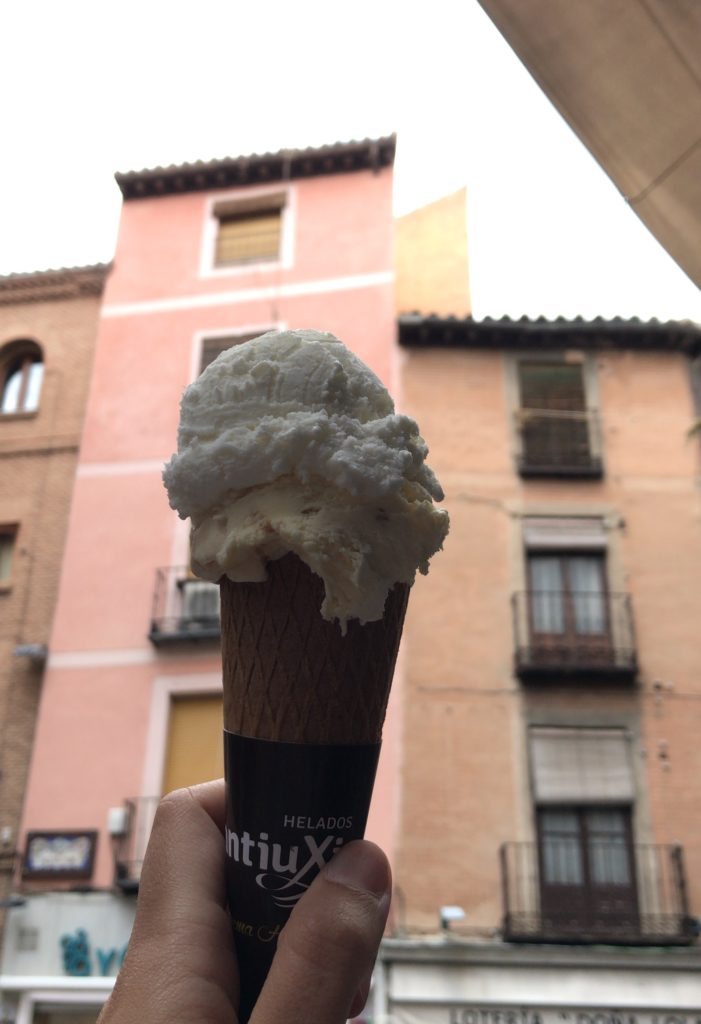 Obsessed with these buildings

Pros: Turrón is a special almond nougat candy common in Spain. It is also absolutely delicious in helado form. This heladería is located on a great little street in Toledo filled with shops and tapas restaurants.

Cons: Both a pro and a con — Antiu Xixona is a chain brand, and so it can be found throughout Spain. So my dessert wasn’t unique to Toledo, I later found out, but then again, I can find it again in Madrid.

Note: Toledo is an absolutely magical little town. Big plus was that the ATMs in Toledo didn’t charge me a transaction fee. And thus, I was able to get cash to buy gelato. 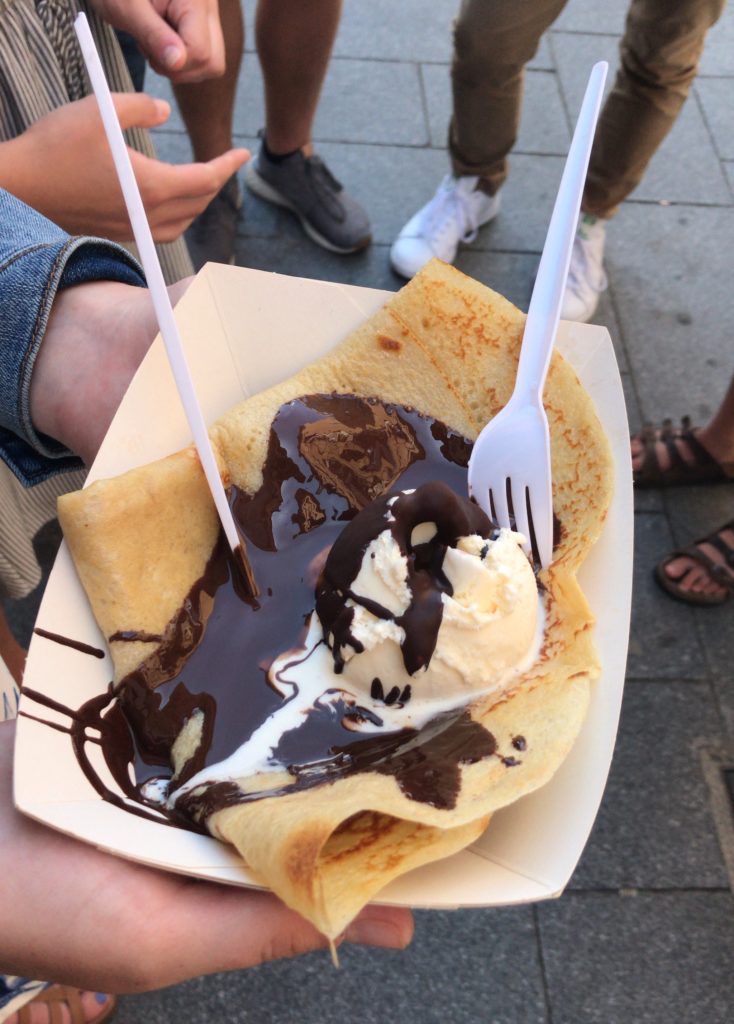 I need five more of these

Flavor(s): Vanilla with a Crepe and Chocolate

Pros: This was one of the most delicious things I have ever eaten. I’m all about simple vanilla ice cream with other desserts. The ice cream was cold, the crepe was hot, there wasn’t too much chocolate (yes, I believe that there can be too much chocolate). I ate this while climbing up to the viewpoint for the Roman aqueduct in Segovia.

Cons: Difficult to eat while walking. Upon reflection I would recommend sitting down to eat. Also, it takes a few minutes to prepare because the crepe has to be cooked from batter. Be ready to wait around a bit (but it’s completely worth it).

Note: My love for crepes is actually a new-found thing as of this summer. My host mom in Serbia made crepes for me and my host sisters most nights before bed as a snack, and we ate them either with honey or with Eurocrem, which is a cocoa- and hazelnut-flavored milk-chocolate spread (much lighter than Nutella). This crepe was my first this summer with chocolate not as a spread, and with ice cream.