Please read Part I: UA in Germany: Part I

We made it to Germany.

One thought has always come to my mind on the now three flights I have ever had the pleasure of patronizing: I do not trust anyone who closes the shade on the window seat. We took an overnight flight from Atlanta to Frankfurt–a solid nine hours–over the beautiful New York, Ireland, England, Brussels, and west Germany. A cool feeling? Knowing the next time my feet would touch the ground, I would be 5,000 miles away from everything I’ve ever known with a huge body of water in between, in not only Europe, but Germany.

It didn’t hit me until we got off of the plane, and the first sign I see in the Frankfurt flughafen is in German. German! I felt like I would see Jason Bourne sprint by at any moment. What a feeling. 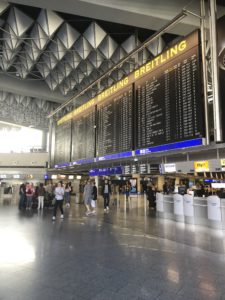 The departure board at the Frankfurt am Main Airport.

We would not stay in Frankfurt but long enough to make it downstairs to the train station–the Hauptbahnhof–where we were to catch the train to nearby Karlsruhe, where we had meetings lined up between the University of Alabama and the local international university, Karlschochschule. This train ride to Karlsruhe was the first of countless trains over our next three weeks, and this one train ride specifically was the most uncomfortable I felt the entire trip. It was a good uncomfortable, or as good as uncomfortable can be–we were all completely out of our element.

The way the German train system works (the Deutschbahn) is that even if the train’s seats are sold out, tickets are still purchasable–which leads to a group of 20 college students, whose German vocabulary can be summed by “hello”, “goodbye”, and “excuse me”, each awkwardly standing in the aisle of the train with suitcases the size of coffee tables. It was a very interesting feeling.

We make it through the train station to Karlsruhe, check out the hostel [pro travel tip: if you can get to Europe, hostels are the way to go–maybe 19 Euros a night and they are pretty nice], and go about immediately exploring Karlsruhe. The sights, sounds, and language are things you can prepare yourself for as much as you want, but do not hit you until you are there. It will hit you from strange places as well. At our first lunch in Germany, I heard an ambulance go by. I had completely forgotten about the difference in our ambulance sirens and the European counterpart. I was blown away, the whole “dude I’m in GERMANY!!” thought came back into my mind, as it did many hundred times over throughout the three weeks. We settled for the rest of the night and got ready for a big day the next day.

For a kid who has never been outside of the southern U.S., we jumped right off the diving board and into the deep end–on our second day in Germany, we took a train right across the border into France–Strasbourg. Strasbourg is located in the very northeasterly corner of France, in the world-famous province of Alsace, a piece of land that has changed hands many times over the centuries. While very French, the city has very visible German roots. This day would end up being one of my favorite days of my life–we took a segway tour, in all of our touristy glory, to see the ancient city of Strasbourg and its world famous gothic cathedral. 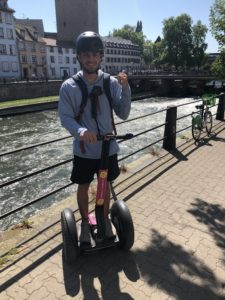 Myself on a segway in Strasbourg, complete with my GoPro. Does it get any more tourist? 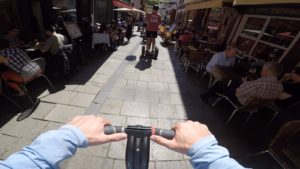 A GoPro shot of me segway-ing through the streets of Strasbourg, France. How beautiful of a day this was.

Never heard of the Strasbourg cathedral? A google search of Strasbourg is essentially a search of its Cathedral. Here is a snippet taken from Wikipedia:

“At 142 metres (466 feet), it was the world’s tallest building from 1647 to 1874 (227 years), when it was surpassed by St. Nikolai’s Church, Hamburg. Today it is the sixth-tallest church in the world and the highest extant structure built entirely in the Middle Ages.”

Yup. Famous building. Construction began in the year A.D. 1015. As in 1,003 years ago. Or halfway to the birth of JESUS. That’s so old, it makes your head spin around. If you’re like me, you have to literally sit and take it in. We would segway to see all the beautiful sights of the city, hear the people speaking French ( I was lucky–my mother speaks fluent French. I know enough to converse), enjoy cheese and wine, and see the European Union seat, as well as the Cathedral. We toured the Cathedral, and actually took the stairs up 38753758357 floors to a beautiful viewing patio to cap the day, and back to Karlsruhe we went. 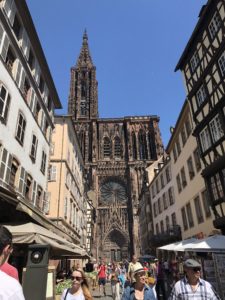 The world famous Strasbourg Cathedral from the street. Easy to see why it is so famous–it’s so intricately beautiful.

We quickly made our way back to Karlsruhe for a great day of conversation and interaction with students from all over the world at Karlschochschule–Germany, Norway, Austria, to name a few. It was very interesting to see and hear their expectations and stereotypes, not only about Americans–but about southerners in general. “Country music!” they quickly said. Not complaining.

An interesting tidbit I learned and quickly agreed with: it was brought to my attention that Americans tend to exaggerate what we say. Listen to yourself as you speak the next few days, I am sure you’ll agree with me. Say you eat an excellent grilled cheese tomorrow for lunch. Is it life changing? Is it actually the best grilled cheese you’ve ever had? An interesting thought. 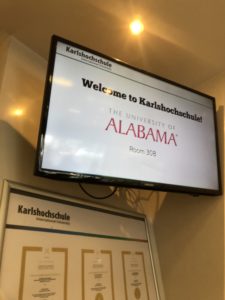 This was displayed upon entry to the Karlschochschule. Roll tide!

After a rather interesting day of discussion, debate, and picnic, we got taken out by the students to show us around the nightlife of Karlsruhe. I haven’t discussed German food up to this point, or the beer (that is on purpose)–the food is the best kind of interesting. I love German food and its bratwurst, maultaschen (German ravioli), sauerkraut goodness. At all costs, don’t come to Germany on a diet. You’ll find yourself quickly cheating at every meal. I’ll leave the beer discussion solely for when I discuss Munich.

Tomorrow, we head to Heidelberg. Auf Wiedersehen (for now)! 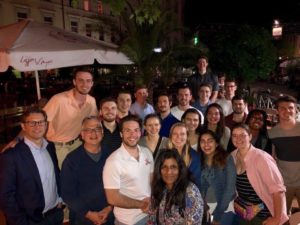 Our group, with Karlschochschule students and faculty at Lehner’s restaurant in Karlsruhe, Germany. Our first night in Germany!