During a free day in our program, a friend and I decided to take a day trip to a site our teacher had recommended– crystal clear natural, spring-fed pools nestled in the Spanish mountains. The destination sounded spectacular and the trip there was free with our public transportation passes, so we set out on a Sunday morning ready for an adventure. Little did we know, Spain had more adventure in store than we had bargained for.

We began our journey at the metro station, where we discovered that our line had been delayed several minutes due to maintenance. So, after changing lines, we found ourselves sprinting breathlessly through the station, up flights of stairs, and down the train platform only to discover that the train to the pools was nowhere to be found. We hopped on the next one that pulled into the station, thinking that it must have just been late, as most things are in Spain. However, while speeding through the countryside, we realized that we were not bound for the correct town.

We ended up in a place called Collado, where we realized that the train we needed would be arriving in about an hour. For a minute we felt stranded, but upon exiting the train station, we realized that we were lost in the perfect spot. A band was playing in the town’s small courtyard, and smiling faces populated the tables and chairs outside the local cafes and ice cream shop. We opted to walk around and browse the stores (both of us found some adorable clothes, by the way) until our train arrived to take us on the next leg of our journey. We were a bit sad to leave the sweet town we stumbled upon by accident, but our excitement for our ultimate destination continued to build.

Once we hopped off the train in the town of Cercedilla and googled the address of the natural pools, we realized we were still about an hour away from our desired location. We caught sight of a crowded bus outside and packed in with the hope that it would take us a bit closer to the springs. Eventually we reached a fork in the road and were informed that the stop was as close as the bus would be able to take us, so we clambered off and tried to get our bearings. It became apparent that the only way to finally reach the pool was a 30 minute hike up the mountain. We were so close we could taste it.

The hike was gorgeous– wildflowers bloomed on all sides and a brook bubbled past us and all the way down the mountain. At last, we turned through some trees, waded through some wild ferns, and felt the sweltering temperature drop about 15 degrees. We crossed a rickety wooden bridge and found ourselves looking over a brilliant blue body of water at a breathtaking mountain landscape. Families with young children splashed around and couples lounged tanning on the lush carpet of grass. We spent the rest of the day people watching, reading, and cooling off in the chilly pools.

Two metros, two trains, a bus, and a hike later, we had made it to the day trip spot of a lifetime.

Though the day was full of unexpected and somewhat inconvenient twists, they added up to create a day that I will never forget. Luckily, I found myself lost in Spain with the perfect traveling companion– instead of getting frustrated and upset, we managed to smile and laugh the whole way to our destination. I learned a valuable lesson during our trip to the pools: travel is so much more memorable if you learn to embrace every bump in the road.

When you get on the wrong train, embrace it and explore a new town. When you’re trying to learn a new language but keep making mistakes, embrace it and laugh when you accidentally say “I’m pregnant” instead of “I’m embarrassed.” When the cafeteria serves potatoes everyday, embrace it and decide that potatoes are your new favorite food. When there’s no air conditioning in your room, embrace it, open the window, and listen to the sounds of your city outside.

Things are bound to take unexpected turns when you set out on an adventure in a foreign country, but as long as you keep an optimistic attitude and look for the fun in every situation, the twists and turns in your journey could end up being the best parts of it. 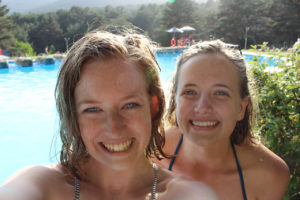 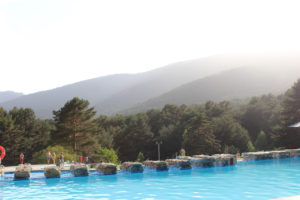