I’m now more than halfway into my stay here in Belgium, and I have to admit, it’s starting to feel like home. Although it initially felt so foreign, our little neighborhood in Brussels is now familiar and comfortable, even after only a few weeks. Some things have been complicated- from the very first day when I realized I should have brought my own toiletries from home instead of counting on the drugstores here to carry the same brands, to struggling to do laundry in a washer with all the buttons labelled in French. However, little struggles like these seem insignificant when there’s so much to see, do, and eat. So far, we’ve visited several European Union institutions, taken a day trip to Ghent, watched Brussels play (and lose to) France in the World Cup semi finals, and eaten fries with mayo probably way more than is healthy.

In addition, every weekend, we take a trip to a different city. The first weekend, it was London; the following weekend was a free one, so I went with a group to Amsterdam; and next weekend we’ll go to Paris. I’m so glad that we’re seeing so much of Europe in a relatively short time, especially because it’s so easy to take the train from Brussels to many other major cities.

One of the best parts of the trip, in my opinion, is the people on it. Even though we’ve all only known each other for a couple weeks, we bonded right away, which has made the experience even better. Although it feels like the program has just started, I’m already dreading leaving this place, but I know I’ll have the memories for a lifetime. 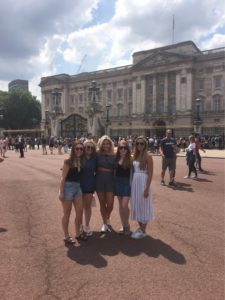