My first few steps in Berlin were shaky due to the exhaustion that accompanies trans-atlantic flight. After a good night’s sleep, our group went to experience a service at the Berliner Dom. Almost completely destroyed by the Allies in WWII, this church has been painstakingly recreated to its original glory. Every detail, from the moulding on the walls, to the stained glass windows, to the massive pipe organ that carries its own balcony, was meticulously crafted with expert artisanship. I can only imagine the countless hours that it took to make this vision come to reality, the pain felt when it was bombed, and the immense satisfaction that came with its restoration. The service itself was brief and concise, and it was interesting to see how the gospel sounded in German. The greatest part of this service by far was the music. We heard the pipe organ play hymnals from Bach and others, and heard the 50 plus member choir sing. I’m not a religious person by any means, but hearing the voices of the choir reverberate through the Dom was hauntingly beautiful to say the least. It nearly brought a tear to my eye to hear the perfect acoustics that were created in a building built before man was able to measure sound waves. After the Dom service, we took a walk around historical Berlin and saw a city that despite it’s long and troubled past, has been able to reinvent itself as a haven for people of all walks of life. It has become one of my favorite cities by far! 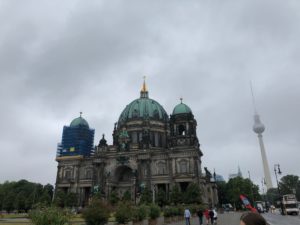 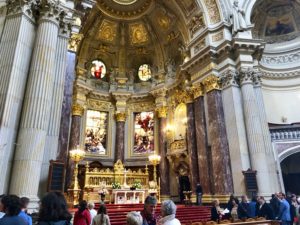 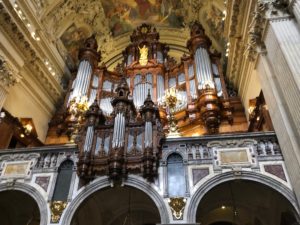 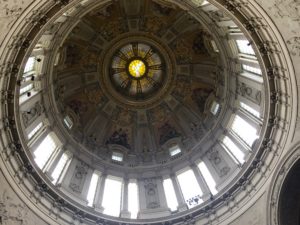