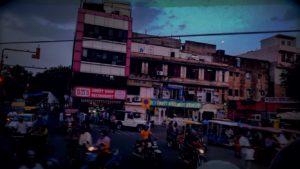 I landed in New Delhi, India on July 6, 2018 at 11:40pm.  I had traveled for 24 hours from Atlanta, Georgia with stops in Philadelphia and London.  After going through customs & immigration and meeting up with my driver, we began the 30-minute trip to the hotel.  I was eager to get there so that I could try to get a few hours of sleep in before my program began the next morning.  I felt excited to get a hint of the atmosphere of the city during the car ride; I imagined I would be able to catch some glimpses of storefronts and maybe see a person or two through the darkness.  What I actually ended up witnessing was completely different.

Delhi alone has a population of over 16 million people and it felt like at least half of them were out along the streets right then and there.  Even though it was past midnight at this point, the roads were packed with cars honking at each other as they weaved across the lanes.  That was when I learned that, besides stopping at red lights, there are basically no enforced traffic laws in India; less than a foot of space can be maintained between speeding cars and if you’re in another car’s way, you better move quickly.  Somehow, pedestrians cross the road (including highways) and stand outside of the sidewalk with great confidence.  I saw a line of stopped cars stretching at least three-quarters of a mile to what I assumed was a busy highway exit but ended up being the wait for an open pump at the gas station.  Not only did stray dogs roam the city, but cattle and goats were everywhere, either laying on a sidewalk or blocking traffic in the streets.  I even saw two men riding cows as their mode of transportation.  Teenagers sat along the grass, men and women chatted on the corner, “open” signs continued to flicker in storefronts.  I was glued to the window.  Delhi was wide, wide awake and consequently, now so was I.