Riding out the Heat Wave

It seems like lately there’s been one thing after another in Japan. After the earthquake in Osaka that cancelled classes, we ended up with rain that lasted for about a week. It made it pretty difficult over the weekend since all the rivers had filled up and were beginning to overflow.

But on the bright side, I was able to see some cute videos of giant salamanders coming out of the rivers. I’ve heard from a friend that they also have them at the aquarium near Kyoto station; hopefully I can go see them before I leave Japan!

Either way, a few weeks back I was lucky enough to meet one of the English literature teachers who’d contacted me about possibly meeting at a cafe and hanging out to talk about King Arthur.

The place we met at was absolutely amazing! And the friend that she brought along was even a teacher at Ritsumeikan! We talked for about two hours in Japanese, discussing what books we were reading through at the moment and making suggestions on what to watch/read next! I probably could have spent the whole day talking with them, honestly! But my friend had to go to a concert, so eventually we had to say our goodbyes.

Before we parted ways, however, both of them advised me to continue my studies in Japanese, and definitely come back to Japan either for grad school or to teach English. I don’t think I could have been any happier after hearing those words! 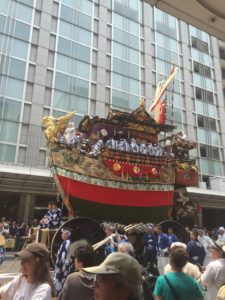 A few weeks after that, I was able to go to the Gion Matsuri with some of my friends! Unfortunately we had to get up early to go, but it was worth it getting to see them pull the big floats along! It looked so hard trying to get them to turn as they made their rounds!

But unfortunately, Kyoto doesn’t really have any way of cooling off. And in the middle of a heat wave, it was really difficult just to stand there and watch for hours. So after a while we walked back up along the street and watched all the floats go past as we walked by them! It wasn’t the same as sitting and watching, but it was still a lot of fun!

Afterwards, we went to go eat McDonalds and then see a movie! It was definitely a fun day right before our last finals began.