The Best People in the Best Place

I have always known I wanted to study abroad but where and when were the parts I was never sure of. However, after a friend told me she was also interested in studying abroad and wanting to go to Madrid, I was all in.

After months of planning, it was finally time for our month abroad together. We knew we would have two other roommates and just assumed Kaleigh and I would be doing what we wanted and occasionally see our roommates at home and for a few meals. But wow were we wrong. After conquering our jet lag and crankiness from a day of travel, we decided to spend the day with our roommates exploring out city. Rachel and Christie, wow did they touch our lives forever. I believe every experience is what you make you, but I feel without meeting them my trip would never have been what it was. From getting lost in the Metro on the first day to making jokes every single time we got off on our Metro stop, we were meant to meet in Madrid. Never in a million years did I think a city thousands of miles away would bring to some of the best people I have ever met. I truly believe that being in another country, opening myself up allowed me to make the best memories with the best people. 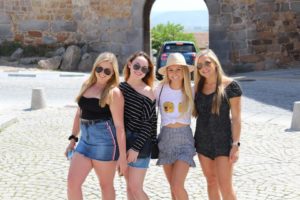