Going abroad, you are introduced to all new foods, and for me, that was what I was most nervous about when going abroad. I typically struggle to stray from cheeseburgers and chicken nuggets, so my first attempt at eating in Spain was quite a struggle. My first meal in Spain was dinner, which threw me off as they do not eat dinner until 10:00 p.m. or later. On top of holding off eating my dinner, they eat tapas which are similar to appetizers. Sticking to what was comfortable was easiest for me, so I went with patatas bravas. Patatas bravas are small potatoes covered in two different sauces. For me, venturing out in Spain was hard to do as I like to stick to the basics. However, my roommates really forced me to try new things including paella, pulpo,  ham, and other traditional dishes. Although I am a picky eater I was always able to find something that interested me at whatever restaurant.

One thing that was a large adjustment for my eating abroad was the meal times. Breakfast was at normal times 7:00 a.m. – 9:00 a.m. and then lunch was around 1:00 p.m. For lunch, it is common to go home to your host family and eat a sit-down meal, similar to an American dinner. Dinner was typically tapas and a much lighter meal than a traditional American dinner. All in all, the food was very different than American food, but for a picky eater I ate just fine, so there is no need to worry for anyone worried about a new food experience. Also there is plenty of ice cream if nothing else. 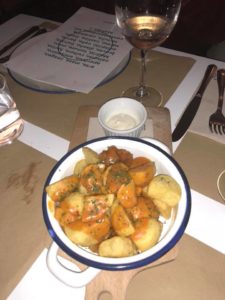