Finally back to the States

Having spent 5 weeks in Germany, I felt that I wanted to stay longer, but alas I had to return to prepare for fall classes. The travel back home ended up being somewhat of a nightmare. First, a security incident in Munich left hundreds of people delayed or stranded. My flight thankfully wasn’t delayed too long, but the airport was on high alert. Then, due to going the cheap route on tickets, I spent 12 hours in the Dublin airport for a connection, just to have said connection overbooked and being involuntarily selected to fly the next day. 24 hours and a hotel room later, I finally was able to fly to my next connection in Iceland, the hub for this particular airline who will remain unnamed. There, I was forced to have my boarding pass re-printed due to a faulty printing the first time. After that, I finally was on my way to Pittsburgh. After landing, I saw my way through customs (relatively easy to do with just one bag) and finally found my way back to the car. After reconnecting the battery I drove another 2 hours back to northeast Ohio where my family lives. What could have been a direct flight from the much closer Cleveland airport was instead a 48-hour mess involving more countries than it should have; all this trouble to save a few hundred bucks. If I had any advice to give if you’re planning on studying abroad is to do your financial research and make sure that you won’t run out of money during your trip, it’s not a good feeling. I am glad to be back in the states with my family, and from here new adventures await me! 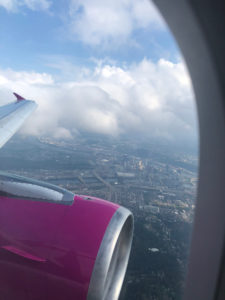