Among all the other wonderful experiences that come with studying abroad, there is also a lot to be learned in the classroom. Not only did I learn so much more about the material covered in the classes that I took, it also really deepened my cultural experience. Being a business major, I took international business and Spanish culture and civilization while abroad. The University I studied at was tailored to students studying abroad. I had class with a lot of people from Egypt, Germany, the US, Italy, and many other places. While we all spoke English, it gave me a unique opportunity to meet people from various cultures and see them in a setting that was foreign to all of us. My international business class gave me even more insight into our cultural differences. Since the majority of us students were from the US or Egypt, we focused on the business strategies and cultural traditions in those places as well as Spain, where we were studying. I found the classes I took to be engaging and interesting but regardless there is so much to be learned by simply taking classes. I also found differences in the grading system. Spanish schools are on a 10 pt scale with 10 being nearly impossible and anything above a 5 is a good grade. Another major difference is the Spanish siesta. While most people think that they get two hours off in the middle of the day for a nap, it is actually to go home and spend lunch time with their families. Spanish people place a high importance of the family unit. Studying abroad rather than just traveling enriched my experience even further. 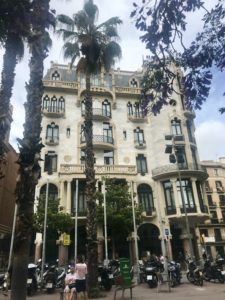