Though my intention was to post frequently throughout my time here in Oxford, time has slipped by in the most enjoyable of ways and my program will be coming to an end next week. I am not sure how my words will ever be able to give this wonderful place the justice it deserves.

As soon as I arrived in the United Kingdom, I was overcome with the best kind of nervous excitement. Stepping off of the flight into Heathrow Airport brought a rush of adrenaline into my jet-lagged brain. My first encounter with a British native occurred as I was going through customs; the customs officer was an older man with a sharp wit—as is a common trait of most British citizens. I knew I had met my match with the people of this country, and I was looking forward to learning so much from the people I encountered over the next month. On our bus ride from London to Oxford, I slept most of the way on account of the six-hour time zone difference (I soon would learn that it took a couple of days to grow accustomed to this change). We arrived in Oxford at Worcester College, our home for the month. 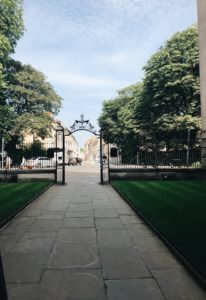 The view from our front door!

After our arrival, our fearless leaders led us on an excursion throughout the college grounds and the city to get a feel for the place where we would be spending the rest of our summer. I was a bit overwhelmed, but this is true of anyone in a new place—regardless of being in a foreign country or not. I knew that I would soon learn the ropes of Oxford, taking only a few days to find my favorite coffee shops and running paths. One of the biggest adjustments that I had to make was coming to terms with the road systems. The British drive on the opposite side of the road from what we’re used to in America…To be honest, I’m not sure this will ever be a normal occurrence to me. If anything, it seems to just make things more complicated, but I soon found out that the British enjoy complicating things that are so often simplified in America. There is a perpetual pomp and circumstance about Oxford and the greater United Kingdom that I have grown to love dearly.

I was already in love with England before embarking on this journey, and my immersion into this culture has brought me into an even deeper infatuation with this country and its people. Oxford itself is a beautiful city, and it overflows with history and culture. Everywhere you look, you see footprints from centuries ago, whether it is in the stained glass of university cathedrals, breezing through the tall grass of the meadows, or nestled within a corner of a local neighborhood pub. The longer you’re here, the more tied into the history you become. It has been so fun to lose myself in this city; it is the easiest way to learn more about it. No matter how long you stay in Oxford, regardless of if it is for a week or a year, you will never be able to see and do it all. There is always something new to experience waiting around the corner. No matter how familiar you become with the city, you will always stumble upon something or someone that you have never encountered before. I think that this is what I will miss most about the city…I am so enamored by the constant adventure that it provides. 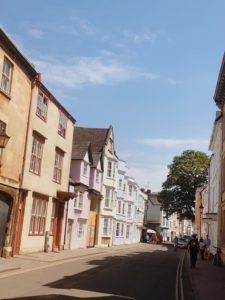 Exploring the streets of Oxford

Though I have spent so much of my time exploring and enjoying my home across the pond, I have also been taking classes! My two classes are “The Real Pirates of the Caribbean” and “Fine Arts of Oxford.” Though I was worried about having to find a balance between academics and amusement, it was easier than I thought. Both of my classes have been so valuable to my overall experience in Oxford. Through my English course on pirates, I have learned about the culture of pirates in relation to British history through literature such as Defoe’s General History of Pirates and Stevenson’s Treasure Island. In addition, members of our class visited the port town of Bristol to participate in our own version of a pirate scavenger hunt. It was an engaging way to learn and explore a city on the British coast. My UH Fine Arts class has given me some of my favorite memories throughout this program. We rarely met in a classroom for this course; we often traveled throughout Oxford to spots of historical and cultural significance. Some of the highlights of this class included a trip to JRR Tolkien’s home, walking the paths that the real-life Alice from Alice in Wonderland once walked, and visiting countless museums. This class challenged my perspective through its assignments and allowed me to see so much of the city that I might not have ever known to explore.

I have been lucky enough to travel extensively throughout England and even outside of the United Kingdom. The first weekend we were here, our whole group travelled into London both days via train. London quickly has become my FAVORITE city. It is unreal!! Just like Oxford, you could live in London for your whole life and still not experience everything the city has to offer. We visited museums such as the National Gallery, stopped by Buckingham Palace, and ate some wonderful food! The second weekend, we visited Canterbury and Dover. I have always wanted to travel to Dover and see the White Cliffs, so it was a very surreal feeling to cross this beautiful destination off of my bucket list. The Canterbury Cathedral is astounding. It boasts centuries of impressive history, which is evident throughout the ornate church. The trip from Oxford was only about two hours, but we were halfway across the country! Everything is so much more accessible because of the relatively small size of England, but there is SO much antiquity throughout this place. That Sunday, a group of us visited the royal residence at Windsor. This charming English town was overflowing with tourists who wanted a peek into the Windsor Castle (the Queen was there this weekend!) and the church where Harry and Meghan were recently married. Though it was overcrowded, I am so glad that we were able to visit this town. I have taken advantage of every opportunity to see more of England because I don’t want to leave with any regrets! 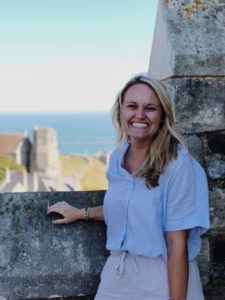 At the top of Dover Castle!!!

I traveled throughout England and even hopped across the English Channel to Paris on our free weekend! Since there is no language barrier for me in England, it was a welcome challenge to communicate with French natives. I know very little French, so I learned a bit of the language and the culture while I was there. Paris is such a beautiful city, and I am so glad that I was able to experience the French lifestyle while I was there. Traveling has been so easy and enjoyable in Europe; it has definitely sparked a greater desire in me to continue seeing more of the world!

It is a very surreal feeling that the time has come for me to pack up my bags and head back to the states. I have had the greatest month in Oxford and all of England, and I know that I will return here someday (hopefully soon). Living in Oxford has been such a perspective-illuminating experience for me. I have mixed emotions about going home. I cannot wait to be back in the land of Chick-Fil-A, ice cubes, and air conditioning (there are few central air units in England!), but I will miss the quaint, picturesque life that I have been living for the past month. I know I will carry these memories back to the states with me, though, and I cannot wait to be reunited with my family and friends!