The professional soccer team from Barranquilla is called Junior. The iconic red and white stripes of their jersey can be seen all around the city on any given day, along with people calling out their famous phrase “¡Junior tu papá!” Earlier in this trip, we all went to a Junior game at the stadium here in Barranquilla. Although it was a tie, the atmosphere was amazing. One section of the stadium had a giant band that jumped up and down and played music the entire 90 minutes of the game plus before and after. The energy and passion was always high, even when the other team scored. This week, Junior made it to the Colombian championship. We went to “La Troja,” a local salsa club to watch the game with hundreds of other loyal fans. On the way to the game, looking out the taxi window, I saw every restaurant, bar, and club full of people faithfully watching the tv screen. Typically “La Troja” is full of amazing salsa dancers, each with their own colorful style, but the night of the game it was all about Junior. After a close, suspenseful game, Junior won in a pk shoot out on their last shot! When Junior won, there was singing, dancing, fireworks, free beer, and flour being thrown all over the place. Being a soccer player and fan of the game, this was an unforgettable experience to see so many people united through soccer and pride for their city. I am so grateful to be immersed in such an exciting soccer culture! 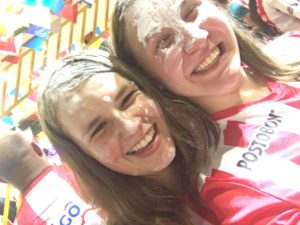